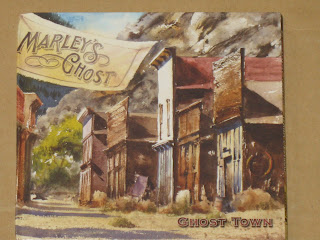 Marley's Ghost is mostly country, a bit of folk, but the band in no way feels limited by these labels. Ghost Town, the band's ninth release, was recorded in Nashville.

The album opens with "Travelin' Teardrop Blues," a song written by Shawn Camp and Herb McCullough. This song has some great guitar work and really nice vocals. It also features Hoot Hester on fiddle. The song has a nice and easy feel, a good track to open the CD.

"Love And Happiness For You" is a sweet song. It was written by Kimmie Rhodes and Emmylou Harris. The lyrics include this: "you will always have a lucky star/that shines because of what you are/even in the deepest dark/because your aim is true/and if i could only have one wish/darling, then it would be this/love and happiness for you." How wonderful is that?

"Poor Old Dirt Farmer" is a great, old-timey sounding song. It was written by Tracy Schwartz, and originally recorded in 1969 by The Strange Creek Singers, and released on the album "Strange Creek Singers." Hoot Hester plays fiddle on the Marley's Ghost version. This is one of the best tracks on the album. It's just so much fun.

Check out these lyrics: "Well the poor old dirt farmer, how bad he must feel/He fell off his tractor up under the wheel/And now his head, shaped like a tread/But he ain't quite dead." "Should I Be Singing The Blues?"

"Should I Be Singing The Blues?" has a cool lounge-type feel to it. It also sports a nice piano part. This song was written by Mike Phelan.

"Less And Less" is a really good song, written by Tim O'Brien. The chorus is "I've been up and down the road a time or two I guess/Now I try to travel around with less and less." Jack Clement plays ukulele on this track.

"Goin' Back To Bowling Green"

"Goin' Back To Bowling Green" is an excellent folk song. This is a song that would be great to have on a mix for those cross-country road trips, especially if energy was lagging and a fun pick-me-up was needed. This song would certainly do the trick. Hoot Hester plays fiddle and mandolin on this song. Kimmie Rhodes and Brooks Watson perform backing vocals. This song was written by Jack Clement.

The Musicians Of Marley's Ghost

Dan Wheetman, Jon Wilcox and Mike Phelan started the band in the late 1980s. Ghost Town is their ninth album. This one was recorded in Nashville, and produced by "Cowboy" Jack Clement. Jack Clement also wrote two of the songs: "Got Leavin' On Her Mind" and "Goin' Back To Bowling Green."

Is Marley's Ghost country? Is it folk? Yes, yes. And it doesn't matter. What matters is that the music is good, the musicians at the top of their game, and the songs interesting and varied.

Posted by Michael Doherty at 2:33 PM