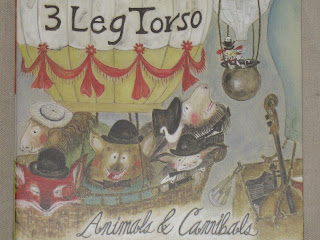 The new CD from 3 Leg Torso features wonderful, delightful instrumental tunes designed to transform the listener's universe into a thing of beauty and joy.

A new album from 3 Leg Torso is a cause for celebration. These guys are outstanding musicians. And they're doing something that nobody else is doing these days. That in itself is something to cheer. But then the music is so good. Most of it is original, composed by Bela R. Balogh and Courtney Von Drehle.

All tracks on Animals & Cannibals are instrumentals. And most have different sections, changes in mood and tone. This band is able to tell complex stories without words, to grab the listener and take him or her on several intricate and wonderful journeys.

Animals & Cannibals opens with "Akiko Yano," a wonderful track with an intriguing structure. It's like classical music with pop music sensibilities. There is also some amazing work on violin.

"Csardas" was written in 1904 by Vittorio Monti, based on a Hungarian folk dance. This music will be familiar to most people, and 3 Leg Torso's rendition should delight and impress everyone with its manic pace, particularly T.J. on xylophone. And then it draws the listener in with its quiet section before bursting into another fun, vibrant area.

"The Life And Times And Good Deeds Of St. Penguin"

The first moments of "The Life And Times And Good Deeds Of St. Penguin" are sad and serious, like something from Schindler's List. And then it takes a delightful turn, becoming a fun and playful tune. This music makes one want to found his own country and hire this band as the official court musicians. (Of course, court choreographers will need to be hired to create official dances to this music.)

This track features Ja'Ttik on tuba and Jen Harrison on French horn.

"Toothless Cannibal" sounds like some whacked-out jazz sprites broke into a room of classical instruments and went to town (after ingesting Chick Corea and Herbie Hancock, that is). This is one of the best tracks on the CD. Just wonderful.

"Driving Along With My Cow In My Volga"

Let this song take over, and it will assuredly transform you into a cartoon character. Everything around you will become animated, and you'll become capable of feats astounding and absurd. It's true. Just give it a listen. Household objects will begin dancing and telling you fantastic tales.

Halfway through this album, suddenly there is this beautiful song titled "According To Chagall." It's wonderful and nostalgic, and even contains a moment evocative of childhood dreaming. Courtney Von Drehle wrote this one.

This song starts with a cool groove with drums and bass, and then adds some insane strings over that groove. The song is loose and exploratory at times, with some excellent work on bass and violin. In the liner notes, it's credited as a traditional song, arranged by 3 Leg Torso. It's a song in the klezmer tradition, and it's one of the best tracks on the album.

Tarik Banzi plays doumbek on this song. (A doumbek is a type of hand drum, shaped like a goblet.)

"Autumn" is soft and sad, like a puppet who's had several of his strings cut and can't hold his head up or move in anything but circles. And in a world that's getting colder. The violin comes in like a cold and indifferent wind.

Bela R. Balogh plays piano on this track, and it sounds excellent. This is another of the album's best songs.

The album concludes with "The Last Dream," a sweet, reflective piece with some devilish hints.

By the way, 3 Leg Torso also puts on an excellent live performance. If an opportunity comes to attend one of their concerts, take it, seize it, go.