Holly Golightly And The Brokeoffs: "No Help Coming" (2011) CD Review 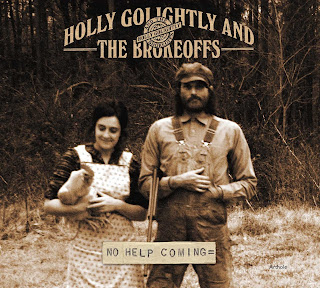 This new album from Holly Golightly And The Brokeoffs is simply wonderful. All I can do is give you my impressions as I listen to it.

"No Help Coming" - Garage folk punk with a blues edge and a rock guitar solo. Holy moly. What do you make of it? What does it make of you? The title track has some kick-ass vocals. "No help coming/honey get the money and run." That's good advice, especially these days.

"The Rest Of Your Life" - Raw power. Holly has a voice that at times you could almost call "cute," but if you did, she might burst from the speakers and smack you across the face. Is it her time in Georgia that gave her voice the twang? I love how she holds onto each word in the lines, "there's no place, no time/there's no easy mind/there's nowhere to hide/not now, not for the rest of your life."

"Burn, Oh Junk Pile, Burn" - There is definitely some Tom Waits influence here, right from the opening of this song - the odd percussion. Like a faerie procession in a junk yard. Like Oberon wants to sell you some hubcaps, and Puck is the front man of a traveling medicine show.

"Here Lies My Love" - It's like folk music with a rusty blade against your throat, and something at your back. And you can't, or don't dare turn around to see what it is. "It was a bad situation/From the beginning to the end/You killed my love/Now the undertaker is your friend." Fantastic, wild stuff on guitar.

"You're Under Arrest" - Country music without the bullshit cowboy hats and boots. No posing in this dive bar anthem. It's somewhat along the lines of some of Cracker's early tunes - same sense of cocky irreverence. "He said I'm under arrest/guess I didn't pass that test/couldn't say the alphabet backwards in time/I'm gonna sleep it off in jail."

"The Whole Day Long" - Holly's vocals are smoother, softer, luring you in, singing "You get what you come looking for/creeping in my door at dawn." It's backroads swamp folk. Folk with an alligator skin, but a fox tail.

"Get Out My House" - Bluesy rock. Loud, immediate and also timeless. Blues from the back porch of a snake worshiper.

"The Only One" - A slower tune. This one has an early 1960s feel, particularly in the way she sings it. (Perhaps somewhere between The Shangri-Las and Lesley Gore.) With a Hawaiian element too, in the guitar. Gorgeous. Holly sings, "Out of all of my mistakes you'll be the only one I'll never be making again."

"Leave It Alone" - Goofy fun. Just wonderful. I absolutely love this. It's catchy, like a children's song for drunks.

"River Of Tears" - Beautiful and moving. How did this album do this to me, bringing me close to tears? I wasn't expecting this gentle acoustic number. Holly's vocals are so beautiful, particularly on "You said see how, see how it is/See how it came to this/This is the now that I got to go with/Set adrift on a river of tears." And the guitar is just perfect. This is probably the album's best track. If you listen to it several times in a row, you will cry.

"Lord Knows We're Drinking" - This is the sort of gospel I can get behind. Celebrate the finer things in life: drinking, fooling around, singing. Am I mad, or does she sound like Dolly Parton on this one? Written by Bill Anderson.

"L.S.D. (Rock 'N' Roll Prison)" - One of the album's few covers, written by Wavy Gravy. Begins weirdly, with echoes: "Hallucination." Then kicks in as country stomp. Recollections of the first time I met Wavy Gravy - when I actually was on LSD - dancing with him in a circle (What band? Maybe Clan Dyken, can't recall). Think the acid was laced with speed, for the circle wasn't going fast enough, me pulling Wavy Gravy - faster, faster, come on man. Fun tune. "L.S.D. made a wreck of me."

No Help Coming is scheduled to be released on April 26, 2011 on Transdreamer Records. Holly Golightly And The Brokeoffs have released three other albums: Medicine County (2010), Dirt Don't Hurt (2008) and You Can't Buy A Gun When You're Crying (2007), the last of which is one of the best album titles ever.

Holly Golightly has released several other albums over the years, including Truly She Is None Other (2003). She was originally in Three Headcoatees, an all-girl band.
Posted by Michael Doherty at 2:17 PM