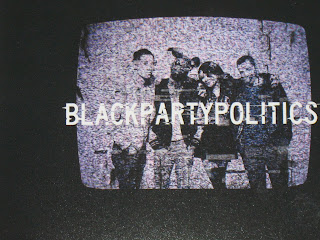 Black Party Politics is a Los Angeles rock band with style and power. They also lay down some good grooves, and audiences at their shows tend to work up a serious sweat dancing. This EP mostly showcases their harder side. This is rock that comes at you loud and furious, but also with some contemporary R&B elements, particularly on "MK Ultra."

"Blue Devils"
The EP's first track, "Blue Devils," opens with a pounding. It immediately goes into a wild rock guitar line. The vocals have a joyous power, with nothing held back. After all, there are only three songs on this EP, so they have to grab the listener immediately. At moments, it feels like that late 1980s rock - you'd almost expect this band to have spiked leather and ridiculous hair. But no, this is no hair band. They're too good for that. And then suddenly there is a quiet moment with keyboards in the lead, and you realize there's more to this group. And the lyrics are lightyears beyond the drivel those late 1980s bands were spouting. The lyrics to "Blue Devils" start, "Won’t you come over young soldier/and get yourself a fix/The first hit is free the next will have you down on your knees."

"Vicious Kiss"
"Vicious Kiss" begins with a sound like a child's toy piano - for just a moment. Then a heavy pounding from the guitar and drums. This song features great vocals, especially during the chorus. Eddie is giving it his all, with great variations in pitch and intensity. Like he says, "I got you where I want you now." Yes, you're in his grasp.

The third track, "MK Ultra," begins with a dancing guitar, and a cool drum beat. But these suddenly give way to a more relaxed R&B groove and feel when the vocals kick in. This is the best track on the CD, both musically and lyrically. The song begins, "The burnt yellow moon bears down/on the streets of this ghost town/And shadows move like serpents on the ground/My mind is leaving me/Replaced by deaf descriptions/Of a world that’s made for show/And I’m the only one cursed to know."

And check out these lyrics: "They can’t control me/I’d rather destroy myself/Saw their spies in my dreams/I pack a bullet for my mental stealth/So I keep an easy Uzi in my arsenal/And if I die before I wake lord/Break my soul/They ain’t gettin a finger on me."

This EP also contains "radio edits" of "Vicious Kiss" and "MK Ultra." That just means the swears have been taken out, but no other words have been inserted as replacements. So there are very brief pauses in the vocals where the word "fuck" ought to be. It's a bit funny in "MK Ultra," because the line "Not a mutha fuckin' finger on me" becomes "Not a mutha f (pause) in' finger on me." Will that fool anyone? No, but it doesn't matter. It will be the first three tracks that will get lots of play in your stereo.

The sound on this EP is heavier than I remember from their concerts at The Boogie Den, their home and usual haunt. The venue is an interesting place in its own right - a place where you can drink and dance to some great bands, but also buy some used clothing, which they sell by the pound. It's in piles and giant cardboard boxes all around the place. (I found a few cool furry coats there.) Of course, once Black Party Politics takes the stage, hunting for that old prom dress takes a back seat. The band has a way of pulling the audience in, sharing the space with them.