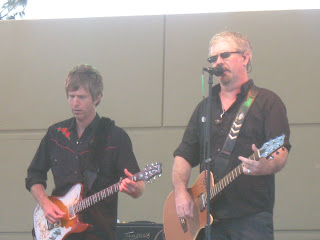 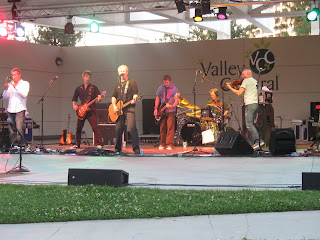 Irish rock band The Young Dubliners performed at Warner Park as part of the 2010 Concerts On The Green series.

The Young Dubliners put on an excellent concert Sunday evening at Warner Park in Woodland Hills. They did two one-hour sets, and a one-song encore.

The Young Dubliners took the stage at 6:05 p.m. and opened the show with "Paddy's Green Shamrock Shore," a song that was included on With All Due Respect, The Irish Sessions (2007).

As one might expect, the band did several songs from the 2009 release, Saints And Sinners. In the first set they performed the title track, as well as "Howaya Girls" and "In The End." Before playing "Saints And Sinners," vocalist/guitarist Keith Roberts joked about conserving water, that the band has always conserved water by drinking beer instead. It's typical Irish drinking humor, but it got a big laugh from the crowd of approximately 4,000 people.

The first set also featured an excellent version of The Pogues' "If I Should Fall From Grace With God," as well as great versions of "Evermore" and "Waxies Dargle," both off of the band's 2005 release, Real World. During the rocking "Waxies Dargle," the audience joyfully shouted out, "Have a pint," after Keith sang the line, "What will you have?" The first set concluded with "Brown Dog," from Absolutely (2002).

The second set started with Bob Boulding taking the stage alone for an electric guitar solo. This led directly into an instrumental tune with the entire band, and then "Stop Me," from the band's 2000 release, Red.

The band encouraged people to dance, and most responded by getting to their feet and dancing for most of the second set.

They did an interesting version of "I'll Tell Me Ma." It was slow at the start, then increased in tempo. They also repeated verses in order to extend it, as it's a short song. They dropped certain lines in the repetition. Before the song, the band joked that there were going to do a song for the ladies. "Are there any ladies out there?" Several women shouted in response. And Keith teased, "I said, 'Ladies.'"

As a side note, very few people in the audience clapped on the "one, two, three" part during that song.

After "I'll Tell Me Ma," they played "Rosie," another song from the Saints And Sinners album. And then toward the end of the second set, they played several instrumental songs, including a song from the film Braveheart.

"Rocky Road To Dublin"
The encore was the always appreciated "Rocky Road To Dublin." This is an incredible song, and one that's impressive, especially as the lyrics are relentless. There are very few pauses, very few places to breathe, built into the song - making it a difficult song to sing. And The Young Dubliners do an amazing version of it.

Concerts On The Green

This concert was part of the free Concerts On The Green series put on by the Valley Cultural Center. Every Sunday in the summer a free concert is put on at Warner Park. This year the tent was no longer in place, and so the old folks had to find shelter elsewhere. In years past, there was a covered area with several folding chairs fairly close to the stage. Of course, that always blocked the view of anyone seated behind that area. So its absence was certainly appreciated by a large number of concert-goers.

The Young Dubliners had played this concert series a few times in past years, but were sorely missing from last year's concert lineup. It was wonderful seeing them return this year. The concerts are generally rigidly scheduled from 6 to 8 p.m., but The Young Dubliners played until 8:15 p.m.