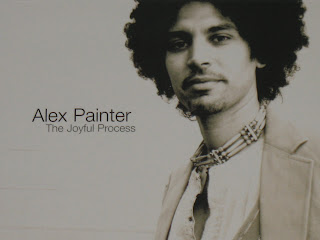 Alex Painter's album The Joyful Process is a wonderful blend of funk, rock, soul and reggae, with incredible vocals and tremendously positive vibes.

Alex Painter played bass in what was possibly the greatest Los Angeles band ever (and one of the greatest bands anywhere for that matter), The Peak Show. He always added a positive vibe to the band's music and to their nearly legendary live performances.

With this album, one can really hear all he has to offer. He's able to stretch out and take command. This CD highlights his tremendous abilities, his incredible talents - on vocals, as well as bass and guitar.

And it's all positive. This is not music to depress or sadden anyone. It's music to uplift and unite. Think Stevie Wonder at his funkiest and most fun. This is dance music. This is good music.

The album opens with "God And Me," which is a lot of fun. It's got a great beat, and amazing, powerful vocals. Alex starts off, "Well, well, well/Girl, you can't deny I loved you/You were my reason for rising this morning."

On "Beautiful People" there are a lot of instruments, a lot of talented folks. But never for even a second does the sound get muddy. Everything is clear and sounds perfect. Apart from being a great song, and a lot of fun, this is really well produced. Listen to that guitar and those horns. Delicious. Franny Franklin and Nichelle Monroe do backing vocals on this one.

The Peak Show Cover
The third track is an interesting song. It's titled "What About Love?" but it's actually a strange cover of The Peak Show's "Still I Love You." But in this version Alex never sings the line, "Still I love you." He's also added to the lyrics a bit, including the line, "What about love." Alex sings, "What about love?/What about holy?/What about virtue?/What about justice?/What about hope?/What about tomorrow?/Why all the sorrow?" He adds the section that starts, "Our love is fire/It shines so brightly/Sometimes it burns." And the music is almost completely different - but it totally works. He takes the song in a whole new direction, and it's wonderful.

Alex Painter is able to do so much with his voice, varying the tones and moods with each song. On a song like "Only Friend" he's able to wrap his voice around it and give it just the tone it needs. The lyrics begin, "Look at the lights, they're shining out of the lonely windows/Picture yourself there, honey, down in the city below/You're not much - you are everything/But face it, he is gone/He didn't care, he just didn't care."

"Freedom" has a reggae beat and excellent vocals. Peter Gumprecht plays flute on this song. "Forever Here" also has a reggae beat. This one is more fully and more traditionally reggae. Though Alex adds a sort of jazzy and funky element to it. The keyboard part is cool. Sean Davis plays bass on this track. Here is a taste of the lyrics: "There are times to hold on and times to let go/Though I know that I love you/I will show myself the door now/Yes, I waited for your sign but I've ignored all the truth right before me/That I'll always be lonely."

A Couple Of Mellow Tunes

The CD ends with two mellower tracks. "Do Love You" is a duet, and is the mellowest song on the album. Caira Franklin does the second lead vocal part on this one. There is also some nice work by Stevie Blacke on strings.

"Girl You Heal" is also sort of mellow, and is stripped down to vocals and acoustic guitar, which is wonderful. The guitar is really nice, but it's the voice that truly shines in this song. Alex sings, "I've always been just a dreamer/You're making me a believer."

After The Peak Show broke up in October of 2004, the band members went on to form several other bands and tackle a number of other projects. These include Bullied By Strings, Cactys Fire, Heartkour, Holland & Clark, Megan Jacobs Band, Salon K, and Strangely Attractive.

Alex Painter was re-united with The Peak Show lead vocalist Holland Greco at a special concert at On The Rox in Los Angeles on January 28, 2010.
Posted by Michael Doherty at 5:58 PM