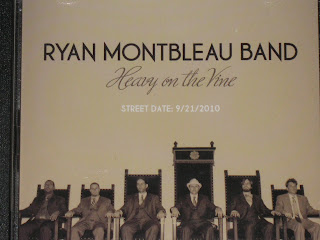 Ryan Montbleau Band's new album, Heavy On The Vine, was produced by Martin Sexton. The band also opened for Marty and then stayed on as his backing band during recent tour dates.

It's interesting that this band was Martin Sexton's backing band, because at times there are obvious similarities between Ryan Montbleau's vocals and Marty's vocals, particularly in a song like "Lonesome Serenade." Ryan's vocals also at times are reminiscent of Alex Painter. It's the energy, the emotion, and the positive feel that the vocals convey.

This album provides some great songs to dance to, like "Songbird" and "I Can't Wait." There are also pretty songs, like "Carry" and "Chariot (I Know)" and "My Best Guess." The album refuses to fit nicely into any one category, mixing rock, folk, reggae and country, and making it all work really well. This album also features some really good songwriting.

"Slippery Road" opens with vocals and acoustic guitar, and then finds a catchy rhythm. Though about a minute and fifteen seconds in, the vocals sound oddly like "Here Comes Santa Claus." Really. That moment lasts for only a few lines, but it's there. In this song about moderation, Ryan sings, "It's okay if I don't get it done today/And it's all right if I stay up late tonight/But if I say the same thing tomorrow/Come hell, come highwater/Take me down from this slippery road." Dave Easley plays pedal steel on this track.

"Songbird" has a reggae beat. And like most reggae music, this song is designed to make people feel good. It has positive vibes, and it has a viola, a wonderful addition and an instrument not often heard in reggae songs. (A viola, for those who don't know, is an instrument similar to a violin, but slightly larger and tuned a fifth lower.) The song is so positive, with lyrics like "Who all can tell you not to sing your story/Who all can tell you that you're singing off key/You are the dance, you are not the dancer/You are the song, not the one who sings." This is an uplifting and fun song.

"I Can't Wait" has a fast country rock rhythm. It's a song that looks toward a bright future, a song dedicated to a person he hasn't yet met. Ryan sings, "Thought I was doing fine, but I was faking/Thought I could make it on my own, but I can't make it/No, I can't wait for you to take my breath away." There is a nice viola section by Laurence Scudder. This song also has fun backing vocals.

"Fix Your Wings" has a bit of a funky feel to the vocals. And it ends with a gospel music-like joyous mood, with a choir of back-up singers.

"Carry" is a nice mellow tune, a pretty love song driven simply by vocals and guitar. This song provides the title for the album in the line, "Time hangs heavy on the vine."

"Chariot (I Know)" is a pretty folk tune about an eager and earnest desire to live life to the fullest every day. The song also suggests patience in striving to realize one's dreams, but then says, "But it don't work like that/The world's too big, the world's too big, I know." This song has references to "Swing Low, Sweet Chariot." It's one of the best songs on the album.

"Hands" is the only instrumental song on the album. A nice bass line, some great keyboards and a cool groove drive this fun instrumental track.

The guitar part at the beginning of "Here et al." is reminiscent of another Boston musican, Peter Mulvey. This song is the story of a musician who is full of questions and doubts, but who realizes his luck, his fortune at being able to do what he loves. There is some funky work on keyboards, with the sweet viola playing over it. That mix works really well.

"More And More And More" has a country feel with viola and piano. It has a great, easy tone. It describes the numerous products that are available these, at so many stores and locations. The song has the great lines, "With another fifty choices/Comes another hundred voices in my head."

"My Best Guess" is just a damned good song. It's another to make people feel good. Here is a taste of the lyrics: "What a time now to show up/Way too late to grow up/Way too soon to take the dive/So I'll shoot the sky instead."

"Stay" certainly has a catchy, happy, old-timey rhythm. The song might be even better if there were a female vocalist adding her voice to this mix - a woman with a 1920s flair to her voice (maybe Katharine Whalen from Squirrel Nut Zippers). But still, as it is, it's a very cool song. The section where the bass is allowed to come to the fore is excellent.


Heavy On The Vine was recorded in Cambridge, Massachusetts. It is scheduled to be released on September 21, 2010. Ryan Montbleau's first album, Begin (2002), was a solo record. His first album with the band was the 2006 release, One Fine Color. His most recent album, Stages: Volume II (2009) saw him once again performing solo. That album contains versions of some songs from Heavy On The Vine, such as "Chariot (I Know)" and "My Best Guess." Ryan Montbleau Band is based in Boston.