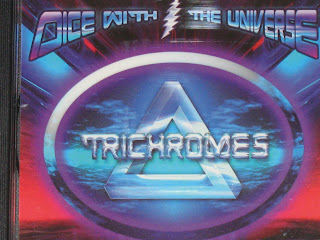 There are only three songs, but this EP has twenty-five minutes of great music, and features features Bill Kreutzmann, drummer for the Grateful Dead.

"Dice With The Universe"

The CD starts with its only original song, "Dice With The Universe." The lyrics were written by Robert Hunter, who wrote many of the Grateful Dead's most loved songs. Here is a taste: "God don't play dice with the universe/Can't catch a cab, then grab a hearse/Don't matter how much you pray and curse/When the law comes down, you best disperse."

Neal Schon and Ira Walker wrote the music. The version on this EP is different from that on the full-length album. This version is slightly longer. It's a cool, easy jam, with some really nice guitar work.

The second song is a Grateful Dead cover, with lyrics by Robert Hunter and music by Jerry Garcia. "New Speedway Boogie" was originally included on the Grateful Dead's 1970 release Workingman's Dead.

The version here seems a bit faster than the Grateful Dead ever played it. The band does its own version, with its own style. While it's impossible for any guitarist in this position to not be compared to Jerry Garcia, Ralph Woodson definitely has his own style and flair. Of course there are moments when it seems he's trying to copy a lick or tone of Jerry's, but he clearly doesn't feel trapped or restricted by that. And of course Neal Schon has his own style. And so the jam in the song is something new. And it's pretty damn cool.

This is a live concert track.

"Tore Up Over You"

This version by the TriChromes has a good groove. It's rock, but with a definite blues edge. It's got a nice jam too which keeps the same groove, but never gets dull. There is some very cool drumming by Bill Kreutzmann.

This is a live track.


This CD is dedicated to the memory of Ken Kesey, who died in November of 2001. Ken Kesey was closely tied to the early development of the Grateful Dead, and was part of the extended family throughout the band's existence. The Dead were the house band for Kesey's acid tests in 1965 and 1966 (for the first of these, the Grateful Dead still performed under their previous name, The Warlocks).

Musicians Include Neal Schon From Journey
The musicians on this EP are Bill Kreutzmann on drums, Neal Schon on guitar, Ralph Woodson on guitar, Ira Walker on bass, and Sy Klopps on vocals. (Bill, Ralph and Sy are also on the full-length CD, with the addition of Mike DiPirro on bass.)

Neal Schon is best known as the guitarist for Journey.

Since Jerry Garcia's death in 1995, the surviving members of the Grateful Dead have done various individual projects. Bill Kreutzmann formed House Of Spirits in 1998. And then in 2002 he released this TriChromes EP as well as a full length CD titled simply TriChromes. (This EP was released in February on 33rd Street Records, and the full-length CD came out in July of 2002.)

In 2009 he got back together with the surviving members of the Grateful Dead, and toured as The Dead. And now in 2010 he is performing with a new band, 7 Walkers. They will be releasing an album later this year.

(Note: I originally posted this review on June 6, 2010 on another website.)
Posted by Michael Doherty at 2:11 PM