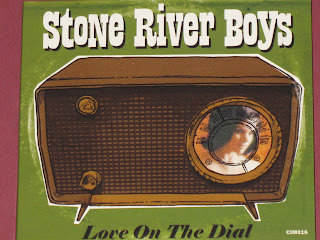 The Stone River Boys feature guitarist Dave Gonzalez (from The Hacienda Brothers) and vocalist Mike Barfield. Most of the songs on Love On The Dial are originals, with four notable exceptions: "Bluebonnet Blue," "Can I Change My Mind," "Take A Giant Step" and "Special."

The album starts with "Bluebonnet Blue," a fun honky tonk rock tune. The guitar opening is similar to something from T-Rex, but then with an obvious country influence. This song has a fun mix of influences and genres, including 1950s rock. This song is a cover, written by Stephen Bruton and included on his 1995 release, Right On Time.

"The Struggle" is a great song. It's an interesting tune featuring great guitar work and a very cool bass part. The song is kind of reminiscent of 1960s R&B and rock bands, with a touch of the Blues Brothers' charm. The song also has a nice sense of humor, calling the struggle a new dance that's sweeping the world. "I'm going to show you a brand new dance/Slide to your feet to the left, and slide back to the right/We're going to push and pull and hold each other and struggle for the rest of our lives."

"Lovers Prison" is another great song. The vocal rhythms at the beginning are reminiscent of The Lovin' Spoonful's "Nashville Cats." It's a playful tune, both musically and lyrically. Near the beginning of the song, Mike Barfield sings, "I am lying here right next to my gal, dreaming about other women." And then in the chorus he sings, "Because if she knew what was on mind/I'd be locked in this lovers prison for the rest of my life."

"Love On The Dial" Title Track

"Love On The Dial," the album's title track, has a cool groove, and lyrics to match. Mike Barfield sings, "We need to walk softly on our love affair/You know that our love is on trial/We'd better pay attention and figure it out/Because giving up is never in style/Put a little love on the dial."

"Take A Giant Step" (Yes, The Monkees Song)
"Take A Giant Step" is a song written by Gerry Goffin and Carole King, and made popular by The Monkees (it was one of the best songs on The Monkees' first album). The version included here is quite a bit different from that by The Monkees. It is much, much slower. Once one forgets about the Monkees version, it's easy to appreciate how cool this version is. The mood is very different, but it works. (Think of when the Grateful Dead slowed down "Friend Of The Devil" in concert performances in later years - it was still excellent, but a different kind of excellent, with a different mood.)

"Martha" is a phenomenal song, with a great tone, mood and vocals. It slowly builds, which is wonderful. The lyrics, the vocals really drive the song. Mike Barfield sings, "You can change the way you're living when the times are good/But you can't change away your past, though you wish you could." This is one of the best songs on the album.

"Steel City" is an instrumental. It's a fun little country rock tune with a simple steady bass line and drum beat. The guitar is then freed to go a little wild. Very nice.

The album concludes with "Boomerang," a nice rocking tune, which is once again reminiscent of some of the 1960s R&B and rock music. This song makes references to other songs from the album, such as "Love On The Dial" and "The Struggle," and features some nice harmonica work and some cool drum fills.

The musicians on this album are Mike Barfield on vocals, harmonica and percussion; Dave Gonzalez on vocals, guitars and Hammond organ; Dave Biller on steel guitar, baritone guitar and acoustic guitar; Scott Esbeck on bass and harmony vocals; Hank Maninger on bass for "The Struggle," "40 Acres" and "Martha"; Kevin Smith on bass for "Lovers Prison" and "Take A Giant Step"; Justin Jones on drums; Damien Llanes on drums; Fuzzy Blazek on steel guitar; and James Sweeny on Hammond organ and piano on "Can I Change My Mind," "Love On The Dial" and "Still Feel The Feeling."


The band's name came from the first place the band rehearsed, on a street called Stone River in Austin, Texas. Love On The Dial is the Stone River Boys' first album. It is scheduled to be released May 18, 2010 on Cow Island Music.