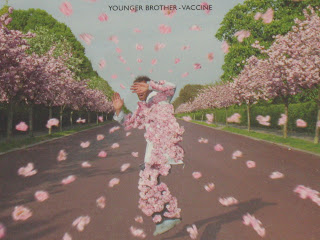 Younger Brother's new album creates intriguing landscapes. It mixes electronica, pop, trance and dance to create a sound all its own. And there is a jam band influence as well. Grateful Dead fans will be interested to note that Furthur drummer Joe Russo is a member of this band. As is Marc Brownstein from the Disco Biscuits. All of the songs on Vaccine are originals.

"Crystalline," the album's opening track, begins with dark notes, forboding, like from a horror or suspense film. Those fade into the background as the vocals come in. The vocals have an undeniable beauty. There is something almost angelic about them - but an angel trapped between worlds. "Where did you come from?" It ends as electronica over those early notes, but the song is much more than that.

"Shine" begins in a ghostly realm. A dangerous wind gives way to a great dance rhythm. It then has a fun pop thing going on. It's catchy and has a beauty as well. How does this song achieve all of that? You'll have to give it a listen yourself. The lyrics are simple, but effective: "Sometimes you shine/Sometimes you fall/Sometimes you know/Sometimes you need/Someone to hold/Something that's real."

About a minute and fifteen seconds into this track, "Pound A Rhythm" grabbed me. There is this brief eerie sound, followed by an excellent moment on keys. It has a nice rhythm on drums too, something to dance to. And then there is a wild instrumental section. This song sounds like nothing else I've heard. I love it. And when it seems over, it's not.

"Night Lead Me Astray" is beautiful. It eases in before kicking in with an intriguing drum rhythm, and there are some surprising changes throughout. But it's the vocals that really drive this song, and make it one of the best tracks on this CD. Here is a taste of the lyrics: "I don't want to wake up, wake up again with the world the same as she was back then/I know I'll fall over and over and over/and you'll pick me."

"Train" reminds me a bit of Sting - the feel of some of his more ethereal, exploratory music - though this track is in some ways the closest to "rock" on this album, due mostly to the guitar. This song has a good beat (and yes, those handclaps are cool), and a great groove. It's just an all-around fantastic song, one of this CD's highlights. Ruu Campbell wrote the lyrics while taking the train into the studio.

"SYS 700" begins like a clock ticking away the moments of purgatory, then moves into darker sounds, like the opening of the first track. The song builds, and when you think it will explode, it actually surprises you by going into a relatively quiet, or at least subdued, percussive section. Trance dance - close your eyes, and spin around the floor. Toward the end the mellow vocal line is combined with the electronica dance beat, and it works wonderfully.

"Tetris" has a slow build, sounding at first like a heartbeat behind glass, or within machinery, but with beauty behind it, like a sunrise. A sunrise to destroy the machines, the mechanical landscape. Then there is a march on the snare drum - as if to some kind of war - with wind blowing round the field of battle. And then the vocals begin - high, and within the rolling storm. "Tetris" ends with the line, "I'm still here."


Younger Brother is Simon Posford on synth and guitar, Benji Vaughan on synth, and Ruu Campbell on vocals, with Marc Brownstein on bass, Tom Hamilton on guitar, and Joe Russo on drums.

Vaccine is scheduled to be released April 26, 2011 through Twisted Records and SCI Fidelity Records.
Posted by Michael Doherty at 4:39 PM