The Monkees: "The Birds, The Bees & The Monkees" Disc 1 Stereo 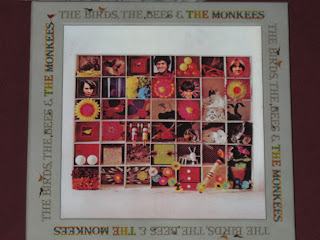 The Monkees' fifth album gets the deluxe treatment from Rhino Records - three discs, 88 tracks. The first disc is the entire stereo album and bonus tracks.

Deluxe editions of the first four Monkees albums were released in 2006 and 2007. But each of those contained only two discs. For the deluxe edition of the fifth Monkees album, The Birds, The Bees & The Monkees, Rhino Records went all out, releasing an incredible box set of three discs (containing a total of 88 tracks), a book and even a button.

Original Stereo Album And Bonus Tracks
The first disc contains the entire original stereo album and fifteen bonus tracks. It's 79 minutes worth of music. They couldn't have squeezed anything else onto this even if they'd tried.

The album opens with "Dream World," a song that was written by David Jones and Steve Pitts. The harpsichord is absolutely wonderful, but the song is marred a bit by the strings.

"Auntie's Municipal Court" is one of the best Monkees songs. It was written by Michael Nesmith and Keith Allison, so it has just a bit of Michael's country-rock flavor, sounding a bit like some of the work by The Byrds. Micky Dolenz sings lead on it.

"Tapioca Tundra" and "Daydream Believer"
"Tapioca Tundra" is a very cool song written by Michael Nesmith. He sings lead on this one. He was writing a lot of poetry at the time, and it shows in these lyrics. The song starts, "Reasoned verse, some prose or rhyme/Lose themselves in other times/And waiting hopes cast silent spells/That speak in clouded clues/It cannot be a part of me/For now it's part of you." It was also released as the flip side to the "Valleri" single.

"Daydream Believer" is of course the big hit from this album, complete with its odd "7-A" introduction.

"Writing Wrongs" is another strange and wonderful tune written by Michael Nesmith, and one he sings lead on, as well as playing guitar and keyboard. There is a haunting quality to the sound of this song, at least at the beginning. The song has some odd changes, with an interesting guitar rhythm and some peculiar work by Nesmith on Hammond organ.

"I'll Be Back Up On My Feet" is a fun upbeat pop song used in some episodes of the television series. It's one of their best songs, and has a great horn section.

"The Poster" was written by David Jones and Steve Pitts. It's a simple song describing a poster for a circus. But this song is joyous, and Davy's vocals sound great.

"P.O. Box 9847" is a song about writing a personal classified ad. With each verse, or draft, the narrator tries to get closer to the truth of who he is. Written by Tommy Boyce and Bobby Hart, this song features some strange music. It's a wonderful song.

"Magnolia Simms" is an excellent lo-fi song with false starts, scratchy record sounds (including a moment where it skips), acoustic guitars and a great old timey feel. It's another gem written and sung by Michael Nesmith.

The album ends with "Zor And Zam," a great anti-war song about two kings who call for a war and no one answers. This song was featured in the final episode of the television series (an episode directed by Micky Dolenz).

The rest of the CD is all bonus material. "Through The Looking Glass" is a catchy tune previously released as a bonus track on the 1995 re-issue of Instant Replay. "Long Title: Do I Have To Do This All Over Again" would be in the film Head (and on its soundtrack), but was originally intended to be on The Birds, The Bees & The Monkees. Written by Peter Tork, it features some interesting changes a minute and a half into the song.

"Rosemarie" and "Alvin"
"Rosemarie" is one of the craziest, most fun tunes The Monkees ever recorded. It was written by Micky Dolenz. "My Share Of The Sidewalk" is a show tune type of song that Michael Nesmith wrote for Davy Jones. "Alvin" is a short acappella tune that was original supposed to be included on the album, but was pulled from the masters at the last moment.

"We Were Made For Each Other" and "I'm A Man" are instrumental tracks. The CD concludes with "Me Without You," a peppy pop tune written by Tommy Boyce and Bobby Hart, and sung by Davy Jones. Bobby Hart also plays keyboard on this one.


This is the first of three discs included in this amazing Monkees box set. Disc 2: The Original Mono Album & More includes a lot of bonus material, most of it previously unreleased. Disc 3: "The Birds, The Bees & The Raritees" is all bonus material, and almost all of it was previously unreleased. This three-disc set was released on February 8, 2010.
Posted by Michael Doherty at 5:06 PM