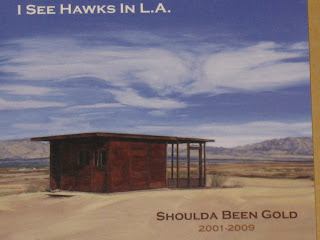 I See Hawks In L.A. in a country rock jam band. That might sound a bit odd, but the music is wonderful. Let's put it this way: they're equally at home in a country bar as a rock club. (Though watching people line dance to them in Burbank was a little surreal.)

This album is subtitled, "2001 - 2009," but it's not a simple rehash or repackaging of old material. Approximately half of the songs are either newly recorded or previously unreleased tracks. This is a great collection of their material. For anyone who is new to the band, this would be the perfect album to start with.

This CD opens with "Sexy Vacation," a fun song about trying in vain to forget a woman. It's playful, starting with the line, "I'd wash my hands of you but I like the way you smell." And it has the excellent line, "I'd try to be happy, but you know I'm rather well suited for the life of strife and trials and tribulations."

"Shoulda Been Gold"
"Shoulda Been Gold," the title track, is a pretty song that at times during a verse sounds like something Son Volt or Wilco might have done. This is one of those songs that gets under the skin, especially after a few times listening to it. The lyrics include this: "Awake in the willows/awake in the scattered sun/I followed you through the shadows/And we wandered under trembling leaves/in the morning." It's just a wonderful song.

"Humboldt" has some really interesting changes and guitar work. And it features excellent vocals.

"Byrd From West Virginia" Is About Senator Robert Byrd

"Byrd From West Virginia" is a cool acoustic song that tells the tale of Senator Robert Byrd. The song starts in the Depression, goes through World War II and up through the present. Byrd was a member of the Ku Klux Klan. He was elected to an unprecedented ninth term as Senator in 2006. He's the longest-serving senator in the country's history.

Rick Shea's mandolin part on this song is excellent.

"Bossier City" is a really good song, and the only cover on the album. It was written by B.J. Bourgoin, and was a sort of hit for David Allan Coe in the 1970s.

"Highway Down" is a wonderful traveling song. It starts off quiet and sad, but does kick in. This is one of the best songs on the album (and this is an album full of great songs). Make sure to include this song on any mix CDs for those cross-country road trips.

"Laissez Les Bon Temps Roulet" is a pretty song, with a great fiddle part. The lyrics start off, "We walked along the river/heard the whistle of the Dixie Belle/well we never made it to heaven/and there are secrets we can never tell."

"The Salesman" has a bluegrass feel. It's a fun song, with great vocals. Brantley Kearns performs lead vocals on this song. Cody Bryant plays banjo.

"I See Hawks In L.A." is a great tune. And yes, the name of the band is the name of the song. That puts this band in the company of They Might Be Giants, Bad Company, Bullied By Strings and Kajagoogoo, who all have song titles sharing their band names.

"The Mystery Of Life" Live Recording

The album ends with a live recording of "The Mystery Of Life." This is a great acoustic song. It's quiet and beautiful, with amazing vocals. The fiddle, which kicks in nearly two minutes into the song, is excellent.

For anyone who hasn't seen this band perform live, this track will give you a bit of a taste of their shows. Enjoy it, and then go see them in concert.

Musicians On CD Include Brantley Kearns And John McDuffie

I See Hawks In L.A. is as follows: Rob Waller on lead vocals, acoustic guitar; Paul Lacques on guitar, lap steel, dobro and vocals; Paul Marshall on bass and vocals; and Shawn Nourse on drums.

There are a lot of guest musicians on this CD. Guest musicians include Brantley Kearns on fiddle, mandolin and vocals. It's always a joy to hear Brantley playing the fiddle. John McDuffie plays pedal steel on "Sexy Vacation," "Shoulda Been Gold," "Humboldt," "Bossier City," "Soul Power" and "Grapevine." John McDuffie has played with everyone from Fur Dixon & Steve Werner to Madame Pamita. He's a great guitarist.

The following is the track list for I See Hawks In L.A.'s Shoulda Been Gold:

Posted by Michael Doherty at 2:27 PM