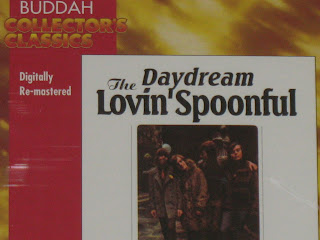 The second album released by The Lovin' Spoonful contained two top-ten hits: "Daydream" and "You Didn't Have To Be So Nice."

Daydream is the second album released by The Lovin' Spoonful. It contains two top-ten hits - "Daydream" and "You Didn't Have To Be So Nice" - but the rest of the album, most of which is rarely heard, is actually excellent. There are catchy songs, with folk influences as well as blues influences. Most songs from this album were written by John Sebastian.

The album opens with one of The Lovin' Spoonful's biggest hits, and the title track to this release, "Daydream." The single reached #2 on the Billboard Hot 100 chart. For the two or three people on the planet who haven't heard this song, here is a bit of the lyrics: "I've been having a sweet dream/I been dreaming since I woke up today/It's starring me and my sweet thing/'Cause she's the one makes me feel this way."

"It's Not Time Now" is a really cool and catchy tune about a couple that's arguing. It starts, "I'd like to tell you that it's fine/But it's not time now/I can't seem to get a word in edgewise anyhow." It was written by John Sebastian and Zal Yanovsky, and is one of the best songs on this album.

"Let The Boy Rock And Roll" is pure rock and roll, definitely firmly in the Chuck Berry school. It even makes a reference to "Johnny B. Goode."

"Jug Band Music" is a fun tune, a bit similar to another of their songs, "Nashville Cats." This song is certainly the most fun on this album, with a joking attitude, apparent in lines like, "I was floatin' in the ocean/Greased with suntan lotion/When I got wiped out by a beach boy/He was surfin' when he hit me but jumped off his board to get me/And he dragged me by the armpit like a child's toy."

"Bald Headed Lena" is also a lot of fun. The band was clearly enjoying itself, for the track includes laughter and some underwater vocal silliness. And it includes lines like, "She can't wear no wig/Because her head's too big/But she's all right with me." "Bald Headed Lena" is the one cover song on this album. It was written by Willy Porryman and Edward Sneed.

"You Didn't Have To Be So Nice"

"You Didn't Have To Be So Nice" was the second single by The Lovin' Spoonful, released in 1965. It reached #10 on the Billboard Hot 100 in early 1966. It's a sweet and pretty and innocent pop rock song. The lyrics start, "You didn't have to be so nice/I would have liked you anyway/If you had just looked once or twice/And gone upon your quiet way."

The Lovin' Spoonful's Daydream was released in 1966, the same year that the first Monkees album was released. When that television series' producers were first considering the project, they had aimed to use The Lovin' Spoonful as the show's rock group. This obviously didn't work out, and instead they decided to create their own group, so they'd be certain to exercise more control over the project. And that of course only worked for a while, as members of The Monkees soon wanted to control the direction of their music and careers.
Posted by Michael Doherty at 4:36 PM