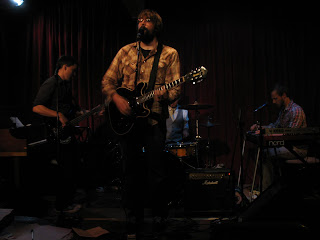 The Grownup Noise performed at Room 5 Lounge in Los Angeles on August 17, 2010.

The Grownup Noise is an excellent Boston-based band. They're currently touring the country with a slightly altered line-up. Paul Hansen is on lead vocals and guitar, and Adam Sankowski is on bass and backing vocals, as usual.

But Katie Franich, their cellist, is currently in Africa documenting dying languages of native tribes. And Todd Marsten, the keyboardist, is in China. The band's current drummer, Aine Fujioka, is likewise unavailable. But Kyle Crane, the band's original drummer, is back behind the kit for this tour. And Dave Middleton is sitting in on keyboards and pedal steel. It's actually a seriously cool lineup.

Not only are these guys all incredible musicians, but they write great tunes. And Paul has an excellent voice. In addition to all of that, they have a sense of humor and a wonderful rapport with their audience.

Opened The Show With "Strawmen"

The Grownup Noise opened their show with "Strawmen," the first track from their five-song EP. It's a good straight forward pop rock tune, and it led right into "Just So You Know." Adam's and Paul's voices blended well on that song, which ended with just the vocals.

Paul introduced "Carnival" with an odd sort of dedication. He said, "This song goes out to the two birds we killed on the road." "Carnival" is one of the band's best songs. It's a fun, catchy tune with great vocals and lyrics. Paul sings, "Drink one for me because some of us are meant to be alone."

In the introduction to "Flower," Paul said (of flowers), "We don't believe that they're a true representation of love." The lyrics start with the line, "A flower is a sour thing." And then later, "A flower is a one-night stand." These lines and others provided some laughs for the audience. Dave did backing vocals as well as played keyboard on this one.

For "The Artist Type," Dave and Paul switched instruments. This song, which Paul said is "about how creative people are selfish," has some interesting changes. It also has the wonderful line, "When beauty is gone, will you come back to me?" This song is included on their EP, Shall We?

Horn Section From The Minor Canon
For the song "Attention," the band called up to the stage the horn section from The Minor Canon (a band that was also on the night's bill, and a band for which Kyle also plays drums). Paul joked that the song is "about how it sucks to get old, even if you're five going on six." Dave played pedal steel on this one.

"Vampire Love Song"
Paul joked that "Vampire Love Song" was written long before the current vampire craze, but that he would love it if the song were featured in one of the current popular vampire series. It has the wonderful line, "If only I could have met you at a time when I was alive." Dave played pedal steel.

The Grownup Noise ended the set with "Outside." This song features some wonderful lyrics, such as "You're breaking in, but you're bringing the sunshine with you." This song was included on the band's EP.

The audience called the band back for an encore, and Dave teased that they were then going to do an extended atonal jazz set. But what they did was one of their absolute coolest tunes, "Grey Skies," a song that was included on their full-length CD. The version they did featured a great bass line and lots of percussion. The chorus is: "And I don't care what they say anymore/I'm inspired by grey skies/You can tell it's me when you see my ill at ease/And once more, the moon will relieve me."

Opening the show at Room 5 Lounge were Loch & Key and The Minor Canon. Both bands did completely enjoyable sets.

(Note: I originally posted this review on August 18, 2010 on another site which has since choked to death on its own vomit.)
Posted by Michael Doherty at 2:05 PM