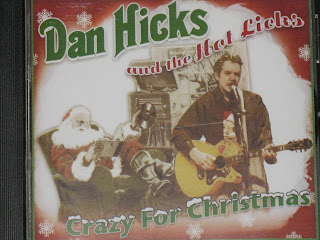 This CD is that rarest of beasts: a good Christmas record.

There is a lot of Christmas music out there. A lot. Neil Diamond alone has released 753 Christmas records (only a slight exaggeration). So what possessed Dan Hicks to record a Christmas record? Who knows? It doesn't matter, for this record is that rare thing: a truly good Christmas album.

It's got that quirky edge that one would expect and hope for from Dan Hicks And The Hot Licks. And of course it's also got great musicianship. Dan Hicks takes the holiday known for the least-cool music ever and tips it on its head and makes it cool and hip.

The album opens with "Christmas Mornin'," a fun, quirky tune about Santa Claus and Rudolph getting ready to work on Christmas morning. This song is sort of a parody of Dan Hicks' own song "Where's The Money" from his 1971 album of the same name. This song features cool backing vocals and the line, "Santa's happy 'cause the reindeer didn't give him no guff."

"Santa Gotta Choo Choo" has a jazzy folk feel. It's a holiday take on "Choo Choo Ch'Boogie," a song originally recorded in 1946 by Louis Jordan And His Tympany Five. The Dan Hicks song tells the tale of the reindeer wanting a break, and so Santa gets himself a train in order to do his job.

The piano comes in a couple of minutes into the song, and it's wonderful.

"Somebody Stole My Santa Claus Suit"

"Somebody Stole My Santa Claus Suit" starts with a great instrumental introduction, complete with "Jingle Bells" and "Santa Claus Is Coming To Town" teases. Then it kicks in with some great lyrics: "Deck the halls and what the hell/I still got my jingle bell/So, sucker, you can keep the suit/'Cause frankly I don't give a hoot."

This song is a bit of folk, a bit of swing, a bit of jazz, and just a whole lot of fun. It features an instrumental section that is wonderful. And the female vocalists are delightful as they sing, "Did somebody steal your Santa Claus suit?"

"Carol Of The Bells"
"Carol Of The Bells" starts as a beautiful rendition, but almost immediately takes a strange bent with what sounds like The Chipmunks. Then it goes into a hip, swinging scat version - with a bit of yodeling thrown in for good measure. This is certainly the coolest, best version of this song ever recorded. (There is even what sounds like a Louis Armstrong impression partway through.)

This song is not only a highlight of this album, but will be a highlight of the entire Christmas season this year (and, we can hope, years to come.) "Carol Of The Bells" was composed by Mykola Dmytrovych Leontovych in 1916.

"Run Run Rudolph" is a classic rock and roll Christmas tune written by Johnny Marks and Marvin Brodie, and made incredibly popular by Chuck Berry. The Dan Hicks And The Hot Licks version is still rock, but acoustic. It features a "Rudolph The Red-Nosed Reindeer" tease, and some nice work on harmonica. It also has a great ending.

"Santa's Workshop" is hilarious. Try not to laugh out loud while listening to it. It's not only the lyrics, but the delivery, as he sings lines like, "Come on, boys, gotta make about a million toys/Gotta paint one red, paint one blue/Paint that one over there blue too." It's the pause before "blue too" that sells it.

The song features silly and wonderful backing vocals. And when the song couldn't possibly get any better - or sillier - along comes a kazoo solo.

"Old Fashioned Christmas" has an undeniable sweetness, while being totally silly. It has some good lyrics, such as "We'll use up last year's wrappings again/Since when is recycling a sin?" And it has a bit of yodeling. The "sanity" section of the song is phenomenal. Really.

"Cool Yule" features more kazoo and some great work on bass. (And am I insane, or one minute and thirty-nine seconds into this song, does it sound very much like the theme to Soap?)

"I've Got Christmas By The Tail"

"I've Got Christmas By The Tail" is a Dan Hicks original song that celebrates the holiday (in its own fashion, of course). He sings, "Every year I am the first on the block to tell Santa what to bring" and "I've got Christmas down pat." We all know folks like this, who wait all year for Christmas, who love all the carols, and on and on.

But then this song has the wonderful lines, "I'll show Christmas just who is boss/If Christmas doesn't like it, then it's Christmas's loss."

"I Saw Mommy Kissin' Santa Claus"
There are tons of versions of this song out there. But Dan Hicks' take is totally original and refreshing. While still holding true to the spirit of the song, Dan Hicks adds a touch of the cool (which, it turns out, the song was sorely needing). And wow, listen to that guitar.

"I Saw Mommy Kissing Santa Claus" was written by Tommie Connor. The first recording of it was a hit in 1952.

This is the coolest version of "Here Comes Santa Claus." It has swing, it has scat, and it has fiddle and some jazzy piano. What more could anyone ask for?

"Under The Mistletoe"
The album concludes with "Under The Mistletoe." Ah yes, a song letting us know where to find romance during the Christmas season. It offers this line of advice: "Just give that green stuff a chance." It's a fun and playful song that has some nice work on fiddle and bass.


Crazy For Christmas is scheduled to be released October 12, 2010 on Surfdog Records. It was produced by Chris Goldsmith, and recorded and mixed by Jimmy Hoyson.

Dan Hicks has been writing and recording music since the late 1960s. In 1965, he joined the San Francisco folk rock group The Charlatans. While still with that band, he created Dan Hicks And His Hot Licks, and their first album was released in 1969. They released three more albums, but disbanded in 1973.

In 1998, Dan Hicks signed to Surfdog Records and began recording as Dan Hicks And The Hot Licks again.

Dan Hicks And The Hot Licks are going to do a concert tour later this year titled Holidaze In Hicksville. At these performances, they will perform Crazy For Christmas in its entirety, as well as doing other Dan Hicks material.