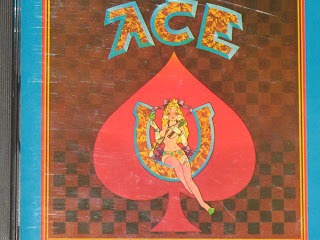 Though billed as a Bob Weir solo album, this is really a Grateful Dead record, with Bob Weir singing lead on all of the songs.

This album features songs co-written and sung by Bob Weir. The majority of the songs were co-written by John Barlow. But some, such as "One More Saturday Night," were co-written by Robert Hunter, who wrote the lyrics to most of the Jerry Garcia songs in the Grateful Dead.

The lyrics to "Black-Throated Wind" were written by John Barlow, and they're pretty wonderful. Here is a taste: "The black-throated wind/Keeps on pouring in/And it speaks of a life that passes like dew/It's forced me to see that you've done better by me/Better by me than I've done by you." The horns on this version are a really nice touch.

"Walk In The Sunshine"

"Walk In The Sunshine" is the only song on this album that wasn't played in concert by the Grateful Dead. It's an interesting song about personal evolution rather than political revolution. And coming as this song did in the early 1970s, it was certainly unusual. And the song was aware of as much, as the lyrics show: "'Cause people'll say:/ 'You got to make a revolution/You got to help me with my cause/You got to burn down all the buildings/You got to rub out all the laws.'/But I ain't burning/Lord I'm only learning/How to become a man of my own." Certainly not the common sentiment at the time.

Though the song starts with Bob Weir saying, "here comes some free advice," he then admits that he really doesn't have the answers. He sings, "I ain't preaching, 'cause I don't know/How to make fast things move along slow/I can't stop it. I can't make it go./Just 'cause I say it, that don't mean that it's so."

There is a really nice piano part by Keith Godchaux on this song.

"Playing In The Band" became a staple of the live Grateful Dead experience. This was a song they regularly stretched out on. The version here is 7:36, short by Dead standards, but relatively long for a studio track.

"Looks Like Rain"
"Looks Like Rain" is a wonderful song, and this is a good version of it. The strings really add to the beauty of this already pretty song. Ed Bogus did the string arrangement for this song. And the lyrics to this song are sweet, such as "I only want to hold you/I don't want to tie you down/Or fence you in the lines/I might have drawn/It's just that I've gotten used to/Havin' you around/My landscape would be empty if you were gone."

Jerry Garcia plays pedal steel on this version of the song. He also played pedal steel with the New Riders Of The Purple Sage and on the song "Teach Your Children" by Crosby, Stills, Nash & Young.

"One More Saturday Night"
"One More Saturay Night" is an unabashed rock and roll number, one of Bob's strong areas. And anyone who saw the Grateful Dead perform on a Saturday was certain to see the band do this song. It was often a set closer. The lyrics to this song were written by Robert Hunter. This version features some great horns, and some fun piano-playing by Keith Godchaux.

The lyrics are excellent. "Faring thee well now/Let your life proceed by its own design/Nothing to tell now./Let the words be ours, I'm done with mine."

As noted, this truly is a Grateful Dead record. However, some of the credits in the liner notes are interesting. Bob Weir is listed as Robert "Ace" Weir, and credited as playing "acoustical and electric guitars." Bill Kreutzmann is listed as William "Fairplay" Kreutzmann. He plays drums. Phil Lesh plays bass, and performs harmony vocal on "Mexicali Blues." Jerry Garcia plays electric guitar, and pedal steel guitar on "Looks Like Rain." Keith Godchaux is on piano. Donna Jean Godchaux is credited for doing "harmony, the chick vocals."

Missing from this recording are Ron "Pigpen" McKernan, who suffered from health issues during this time. His final concert performance with the Grateful Dead was on June 17, 1972, at the Hollywood Bowl. Also missing is Mickey Hart, though he has writing credits on two of the songs - "Greatest Story Ever Told" and "Playing In The Band." This was during Mickey Hart's self-imposed hiatus from the band following his father's embezzling of band funds. He would return to the band in October of 1974.

Additional musicians for this album include Dave Torbert, who plays bass on "Greatest Story Ever Told." Horns are credited to Luis Gasca, Hadley "Snooky" Flowers and The Space Rangers.

Bob Weir's Ace was released in May of 1972. Most of these songs were performed fairly regularly in concert by the Grateful Dead. When this album came out, the Grateful Dead were doing a tour of Europe, and several recordings from that tour would be released on their album, Europe '72. Later, a lot of one of those shows would be released on an album titled Hundred Year Hall.
Posted by Michael Doherty at 2:42 PM