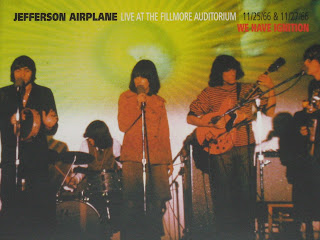 This incredible 2-disc CD contains live performances by Jefferson Airplane from November 25 and 27, 1966 at the Fillmore Auditorium.

The full title of this release is Live At The Fillmore Auditorium 11/25/66 & 11/27/66 - We Have Ignition. But We Have Ignition is the perfect title, for indeed, the band is really taking off on these recordings. They explode out of the gate with a rush of fire just behind them, pushing them forward and up. There's no looking back now. Just onward. At this point they knew they had something great, something alive. And the audience knew it too.

The first disc starts with "Plastic Fantastic Lover" already in progress. A note on the CD packaging says this is due to the original source material. Still, this track has most of the song - three minutes worth. And this version is a wild, energetic take on the song, particularly in the vocals. Both Marty Balin and Grace Slick are trying some interesting things here.

The band then does a powerful version of "High Flyin' Bird," which features more excellent vocal performances (including that wonderful tremolo in Grace's voice).

This is a beautiful and wonderful song - one of the best from that famous record - and yet this is the only known live performance of it. So enjoy. It was written by Paul Kantner.

The version of "Go To Her" on this CD is sung with such force that it comes across as a command to the listener.

"White Rabbit"
"White Rabbit" is one of Jefferson Airplane's most well known songs. It's a song written by Grace Slick and one which she performed originally with Great Society. The first disc has an excellent pre-Surrealistic Pillow version. (By the way, there was a book named after a line in this song - Go Ask Alice - which is supposedly a diary by an anonymous teenager.)

The second disc contains another version of "White Rabbit." This second version seems slightly messier, and a bit hesitant at times, but still interesting.

"She Has Funny Cars"

"She Has Funny Cars" is the last song of the first show. This song was written by Marty Balin and Jorma Kaukonen. I's a strange and intriguing rock song with an unusual vocal line. And this song features some nice work on drums by Spencer Dryden.

The song starts, "Every day I try so hard to know your mind/And find out what's inside you/Time goes on and I don't know just where you are/Or how I'm going to find you."

The tenth track begins with the "Takes Off" intro, but only a very brief bit of it, then goes right into "3/5 Of A Mile In 10 Seconds." This song is amazing, as always. Did the band ever perform a less-than-stellar version of this one? There is such intensity of emotion in the vocals, particularly on lines like, "Especially when it's sold by a kid who's only fifteen."

"The Other Side Of This Life"

After that song the band announced a birthday in the audience, and then launches into a seriously incredible version of "The Other Side Of This Life." The instrumental section at the beginning is just perfect. And then the vocals come pouring in, and the song only gets better. The lyrics start, "Would you like to know a secret/Just between you and me/I don't know where I'm going next/I don't know who I'm gonna be."

Toward the end of the song, they dip just a bit into chaos and it sounds excellent - it sounds just right.

"J.P.P. McStep B. Blues" is another song written by Skip Spence, the band's earlier drummer. This song has a cool rhythm and feel. It's a really wonderful song, and has an undeniable beauty. This is a song that was rarely performed, and this version is excellent.

This CD contains a nice, trippy version of Donovan's "Fat Angel," with some interesting jamming. The song begins with the line, "He will bring happiness in a pipe." And indeed, this song would make good listening for those who have received such happiness. (But of course that's not necessary in order to enjoy this incredible recording.)

And as they did on October 16, 1966, they sing, "Fly Jefferson Airplane/Get you there on time" toward the end of the song in place of "Fly Translove Airways."

The second version of "Plastic Fantastic Lover" is introduced as "a love song to a television set." And wow, what a kick-ass version. The band was on fire at this point. And listen to Grace's improvised vocals - just wonderful. This is a thumping, throbbing, stomping rendition of one of the Airplane's greatest rock songs.

The first disc concludes with "In The Morning," a wild blues rock tune on which Jorma Kaukonen sings lead. He also wrote this tune. This song features some incredible work on guitar - the guitar seems to say, "Hey, I don't want to hurt you, but I will if I have to." And toward the end, the way Jorma draws out each syllable of the lyrics is just perfect.

Second Disc Begins With "3/5 Of A Mile In 10 Seconds"
The beginning of "3/5 Of A Mile In 10 Seconds," the first song on the second disc, is missing. It starts with the line, "Do away with people laughing at my hair." It's missing the first verse. Again, this is due to a cut in the original source material. But there are five wonderful minutes of this classic Airplane tune.

The second disc also contains another version of "In The Morning," that excellent blues tune written by Jorma Kaukonen. The way he sings it is wonderful, drawing it out as if he has all the time in the world. And the steady beat and pace tells him he does. But the electric guitar has a more urgent tone at times - demanding to be heard, to be paid attention to. Now, now, now. This version is a bit longer than the version on the first disc.

"High Flyin' Bird"
The version of "High Flyin' Bird" on the second disc has a different feel from that on the first. This version is a bit more relaxed and loose, yet still has that intensity in the vocals that this song is known for.

The first line of "Today" is "Today I feel like pleasing you more than before." And this early version of the song should please even the most cynical of listeners. This love song has a haunting power and beauty. It would be included on the band's 1967 release, Surrealistic Pillow.

The set ends with an excellent version of "It's No Secret," featuring some really interesting work on guitar.

"My Grandfather's Clock" and "The Other Side Of This Life"
But the band returned that night for a couple of strange ones. They came back on stage so that a photographer could snap a few photos.

The first of these two tracks is "My Grandfather's Clock," a short, fun, whimsical instrumental tune which has never before been released on CD.

The second song is the most amazing version of "The Other Side Of This Life" the band probably ever performed. The jam at the beginning is phenomenal, and the song just takes off from there. It was an unplanned and loose version of the song, and yet it's just incredible.


Jefferson Airplane at the time of this show was Grace Slick on vocals, Marty Balin on vocals, Paul Kantner on vocals and rhythm guitar, Jorma Kaukonen on lead guitar and vocals, Jack Casady on bass and Spencer Dryden on drums.

Chronologically speaking, We Have Ignition is the third of the four Jefferson Airplane concert recordings to be released by Collectors' Choice Music. The other three are Live At The Fillmore Auditorium 10/15/66 Late Show - Signe's Farewell, Live At The Fillmore Auditorium 10/16/66 Early & Late Shows - Grace's Debut, and Return To The Matrix 02/01/68. All four are scheduled for release on October 26, 2010.