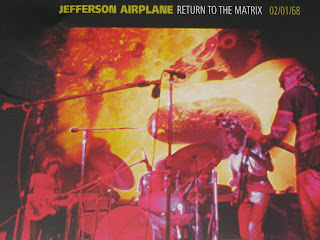 This 2-disc CD includes the only concert performances of "Blues From An Airplane," "Share A Little Joke" and "Ice Cream Phoenix."

The year 1968 was an intriguing one for music, particularly in the San Francisco scene. It was the year that the Grateful Dead released their most psychedelic album, Anthem Of The Sun. The music was expanding. Improvisation and experimentation were key. Everything was awash in acid and other hallucinogens.

As for Jefferson Airplane, 1968 saw the release of Crown Of Creation in September, an album that would reach the number 6 spot on the charts. The band's third album, After Bathing At Baxter's, had been released in November of 1967, and so was still fairly new at the start of 1968. Both of these albums were more psychedelic and experimental than their first two releases.

And just a month into 1968, Jefferson Airplane returned to The Matrix, the venue where the band started in 1965. This CD contains the concert the band performed there on February 1, 1968.

The first disc has a strange beginning, a little improvisation before they start. Then Grace Slick decides the first song is "Somebody To Love." Though as they start it, it sounds a bit similar to "You Really Got Me." This is an interesting variation of "Somebody To Love." There is the wild improvisation as Grace sings, "Your eyes" - it basically stops the song for a moment, and the listener finds himself holding his breath in anticipation of where she'll go with this. Over all, this is an interesting version of the tune. "Somebody To Love" was written by Darby Slick, and originally performed by Great Society.

"Young Girl Sunday Blues" was written by Marty Balin and Paul Kantner, and appeared on After Bathing At Baxter's, the band's latest album as of this recording. The version on this CD features some great work on guitar, weaving intricate webs under and through the vocals.

"She Has Funny Cars"

Before the band starts "She Has Funny Cars," they joke about the decor of the venue - paintings and dirty pictures on the walls. And then BANG - the band jumps right into the song. This is a seriously amazing version of this song - frenetic and fun and fiery. And even the quieter moments have a beautiful and almost delicate intensity. And then there is a trippy improvised section with a great guitar solo that holds little back.

This is the band's final live performance of "Two Heads," which is introduced as "Two Heads On Your Shoulders." It's a strange song written by Grace Slick. Here is a taste of the odd lyrics: "You want two heads on your body/And you've got two mirrors in your hand/Priests are made of brick with gold crosses on a stick/And your nose is too small for this land/Inside your head is your town/Inside your room, your jail."

The song has interesting vocal lines, and various sections - it's sometimes messy, but always interesting.

"Martha" is another tune from After Bathing At Baxter's. This song is at first really about the vocals, the lyrics - with a cool rhythm beneath them. But then the instrumental section comes on, and is so unlike the rest of Airplane's jams. It doesn't wail or scream - it doesn't attack - but rather pulls the listener in with its innovative style and structure, its quiet artistry.

Jefferson Airplane does a heavy bluesy interpretation of "Kansas City," the classic song by Jerry Leiber and Mike Stoller. This was the Airplane's final live performance of this song. The steady blues beat gives the band a base from which to fly off on various tangents, particularly on guitar. They venture into some interesting territory, while the rhythm guitar takes on a rock and roll vibe.

"The Other Side Of This Life"

The band begins "The Other Side Of This Life" with a cool jam. And then when the vocals start, they're doing different things too, with each voice taking its own course. Then the song goes into an excellent jam. The entire crowd must have been dancing and really grooving to this song.
The song breaks down to just vocals and hi-hat for a moment, which is unexpected and wonderful, and leads into a loud, raucous insane section with the vocals and guitar tearing into the fabric of the song. It just builds from there until it's suddenly over.

"Today" begins with a simple beat and the vocals that are mellow and darkly beautiful. It's a wonderful song that draws people in.

"Won't You Try/Saturday Afternoon" is one of the band's best songs, and this version does not disappoint. Particularly impressive is the way it builds toward the end. This song was also included on the After Bathing At Baxter's album, and the following year the band would perform an amazing version of it at Woodstock.

After that song, Grace says, "That last set must have been really exciting, because somebody did a number on the floor." The band then goes into a fun, nicely paced version of "It's No Secret."

"Blues From An Airplane"

Grace Slick jokes that she doesn't know the words to the next song, a song from the band's first album. But hey, she wasn't even in the band when that album was recorded. And this is a song the band didn't ordinarily perform. In fact, this recording is of the only live performance of "Blues From An Airplane." And it's incredible. It's also incredibly short - just over two minutes. But wow, what a great couple of minutes. Seriously.

The second disc starts with "Watch Her Ride," a song from the After Bathing At Baxter's album. It's a song written by Paul Kantner, and one on which he sings lead. Grace teases a girl before the song starts, saying, "A young girl in the front row has been in the back room. I can tell. You're fading out." The vocals are wonderfully crazy on this one, especially toward the end of the song.

This version of "Plastic Fantastic Lover" has a great groove, over which the electric guitar plays and dances, swirling and diving.

"White Rabbit" is one of the most familiar songs of Jefferson Airplane's repertoire. It was written by Grace Slick, and a song she originally performed with Great Society. The vocals blend perfectly on this version. It builds to a great climax, but that climax always comes so soon, as the song is less than two and a half minutes long.

This disc has an interesting version of "3/5 Of A Mile In 10 Seconds," with lots of improvisation, including vocally. Because of that, there are moments that are messy - but there are also moments of fun surprises and great joy.

"Share A Little Joke"
"Share A Little Joke" is a song by Marty Balin that would be included on Crown Of Creation, and album that would be released in September of 1968. Grace Slick asks, "Is there a name to this yet?" Then she says, "No name." And with that, the band starts the song. It's an unusual song that has a cool, mellow groove at times. There is also some interesting work on guitar, as well as drums. This was the only time the band performed this song in concert.

The band introduces the next song as an instrumental they're working on. They tell the audience, "If you have words, sing 'em along." The song is "Ice Cream Phoenix." It would later appear, with lyrics, on Crown Of Creation. This is the only live performance of this song. And it's a nice long jam.

From there they go into a good, trippy, mellow version of Donovan's "Fat Angel." As the band is wont to do, they sing, "Fly Jefferson Airplane/Get you there on time" in place of "Fly Translove Airways."

"The Ballad Of You And Me And Pooneil"

"The Ballad Of You And Me And Pooneil" starts with a loud, wailing electric guitar, then comes in with that great groove. This is one of the band's best songs, and this version has incredible energy and strange touches on guitar and bass. A few minutes in, the song breaks down, and the bass takes over. An intense jam builds from there. When the vocals kick back in, Grace's voice soars and explodes. This is an amazing version of this song, and is more than ten minutes long.

Jefferson Airplane at the time of this recording was Grace Slick on vocals, Marty Balin on vocals, Paul Kantner on vocals and rhythm guitar, Jorma Kaukonen on lead guitar and vocals, Jack Casady on bass and Spencer Dryden on drums.