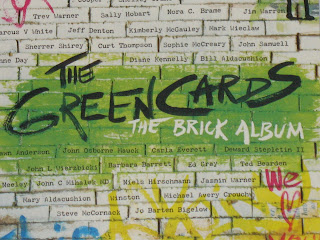 The Greencards are a folk and bluegrass band that freely mixes other genres into its sound, dipping into pop, country and even funk (for a moment or two) for its influences and style. They are currently based in Nashville, Tennessee, though founders Carol Young and Kym Warner are Australian, and the band originated in Austin.

The Greencards were nominated for Grammy awards in 2008 for the song "Mucky The Duck" from Viridian and in 2010 for "The Crystal Merchant" from Fascination. Their new album, The Brick Album, has an intimate but also an immediate feel. This is due in no small part to the way in which the album was recorded. They worked to gets all of the performances in a single take. If a band member wasn't pleased with his or her part, the whole band started again from the top rather than simply recording the problematic section again.

The album's title comes from the way in which the album was funded. Fans of the band bought a "brick," and for contributing to the project, their names are all included on the actual album cover. Actually, some names are on the front, some on the back, and some inside. "Bricks" were sold for one hundred and two hundred dollars apiece (the folks who paid two hundred dollars are the ones whose names grace the front cover). All contributors received an advance copy of the CD. The Brick Album features mostly original tunes (though the band's cover of "Bury Me Beneath The Willow" is one of the CD's many highlights).

The music, the lyrics and especially the vocals all make The Brick Album one of the best CDs released so far this year.

"Make It Out West"

The album opens with "Make It Out West," which sounds like traditional folk infused with funk and some tribal elements. The results are very cool. At first it has that great old timey feel. But that is simply its base, its jumping-off point. Line like "If I make it out west, I'll quit the band/Open a bikini shop in La-la Land" are not your typical bluegrass lyrics. And there is really nothing typical about this band, or this album. The instrumental sections of "Make It Out West" have a groovy bluegrass jam band quality, with each musician taking a turn at lead. Hints of Yonder Mountain String Band. A wonderful track.

"Make It Out West" features Sam Bush on slide resonator mandolin. (Sam Bush is of course known for his work in New Grass Revival as well as for his solo albums.)

"Faded" is a sweeter, prettier tune. The vocals on this one are simply beautiful. The lyrics begin, "I want some time to think/I need more air to breathe/I don't mind/You don't have to follow me/You know I'd like you to run away with me/Somewhere to run to/Someone to cling to, baby." I could do without the odd handclap section at the end, however. That instrumental section would be so much better without the handclaps.

Am I insane, or does "Heart Fixer" sound in some way like a 1970s rock song mixed with a country song? Something in the vocals and tempo. It's like The Greencards took the best elements from both genres and came up with this joyous song. There is so much energy in their playing, and in the vocals, as they sing lines like "The way you move me keeps me going/The way you're going keeps me moving."

"Mrs Madness" is a completely different-sounding song, not like anything else in the bluegrass category. This song begins briefly as a sly character sneaking around in the darkness. And then the vocals come in, as if from a 1930s night club. Feathers and smoke. But this song has its own feel, its own world. There is something delicious in the breathiness of the vocals during lines like, "We'll put some records on/Dance to your favorite song/We could just sing along/If it takes your fancy." Written by Kym Warner, this is one of the album's best tracks.

"Here Lies John" is a glorious pop song played on folk instruments. The results are wonderful. This song also features some amusing lyrics. It starts, "Shades of grey/Your headstone/Here lies you/Now dethroned." And it builds from there. I love the vocals, particularly on the chorus.

All of this is wonderful, but my favorite part of the song is the extended instrumental section toward the end, where the fiddle is given free rein. Unbridled, unleashed, it reaches glorious heights.

"Loving You Is The Only Way To Fly"

"Loving You Is The Only Way To Fly" starts, "I should have moved on long ago/Why I still want you I don't know/These days my best laid plans/Are built on shifting sands/It's not like I don't know you said goodbye/Loving you is the only way to fly." What a wonderful beginning to this really pretty folk song. Once again it's the soft, sweet vocals that make this song get under your skin and into your heart and head.

One of the lines that really sticks out for me is, "Some dreams come true, some pass you by." That line is repeated at the very end, and is essentially the thought the band wants to leave you with, as the final track is an short instrumental reprise (not counting the hidden track, of course).

There are three instrumental tracks on this CD. The first is "Adelaide," which is more in a straight bluesgrass vein (and seeming even more so, following as it does the intoxicating "Mrs. Madness"). Though it sounds like a traditional song in a Celtic style, it was actually written by Kym Warner and Ross Holmes. The other two are "Tale Of Kangario" and "Tale Of Kangario (Reprise)," the latter of which is only a minute and twelve seconds long.

Hidden Song: "Bury Me Beneath The Willow"

I'm not a fan of hidden songs on CDs. I like all the songs to be listed, with songwriting credits. That being said, in this case, the hidden song is one of the best songs on the album. It's a gorgeous and moving rendition of the traditional tune "Bury Me Beneath The Willow." It's a sweet, sad and beautiful tune with which to end the album.

The chorus (for those unfamiliar with this song) is, "So bury me beneath the willow/Under the weeping willow tree/He will know where I am sleeping/And perhaps he'll weep for me."

This song starts at 1:38 on the thirteenth track, "Tale Of Kangario (Reprise)."

Musicians
The Greencards are Carol Young on vocals, bass and percussion; Kym Warner on mandolin, octave mandolin, percussion and vocals; Tyler Andal on fiddle; and Carl Miner on guitar.

Other musicians appearing on this release include Sam Bush on slide resonator mandolin, Eric Darken on percussion, Casey Driessen on fiddle and octave fiddle, Vince Gill on guitar and vocals, Ross Holmes on fiddle, Jedd Hughes on guitar and vocals, Todd Lombardo on guitar, Justin Niebank on percussion, and Kai Welch on resonator guitar. Brian Willis is credited with digital editing.

The Brick Album is scheduled to be released on June 21, 2011 on Darling Street Records, the band's own label.
Posted by Michael Doherty at 5:14 PM