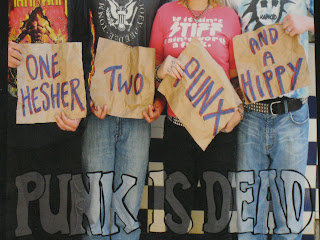 This CD contains punk rock versions of Grateful Dead favorites, such as "Eyes Of The World," "Sugar Magnolia" and "Casey Jones."

The Grateful Dead have been covered by Elvis Costello, Black Crowes, Phish, Los Lobos, Jane's Addiction and Willie Nelson, among others. Their music has been done in many styles: bluegrass, Celtic, classical, reggae (Grateful Dread) and punk.

Punk Is Dead is a punk band that covers Grateful Dead songs. And what better name for the band? For this 2010 release, titled One Hesher, Two Punx And A Hippy, Punk Is Dead chose some of the Dead's most popular and beloved tunes, such as "Eyes Of The World," "Sugar Magnolia" and "Uncle John's Band."

Interestingly, the band chose only songs for which Robert Hunter supplied the lyrics. John Barlow, the Grateful Dead's other chief lyricist, is not represented here (though there are two Bob Weir songs).

"Playing In The Band" is a song the Grateful Dead often stretched out on, sometimes extending it to fifteen or even twenty minutes. Punk Is Dead's version is three minutes sixteen seconds.
Punk has always been about short, quick tunes - in and out, and onto the next - which is something so different from the Grateful Dead, who liked to explore a song, tease it and stretch it to see where it could go, to see what, if any, were its boundaries. And again, that's why it's such a surprise to learn that these songs work so well in the punk realm too. Hell, this entire CD is only eighteen minutes and twenty-two seconds long. That's six songs, which could be an hour or more at a Grateful Dead concert.

"Eyes Of The World"

"Eyes Of The World" is one of the best Grateful Dead songs, and one that would seem least likely to work as a punk song. This song originally appeared on 1973's Wake Of The Flood, and it worked best in the mid-1970s, when it had a jazzy, loose feel. And yet it works insanely well as a tight, quickly paced punk tune.

"Brown Eyed Women" is the least famous of the Grateful Dead's tunes to be included on this release. It's rarely covered, and in fact was never released on a Grateful Dead studio album. Its first official appearance was on the live album Europe 72 (1972). It's a beautiful song that Jerry Garcia sang lead on in the days of the Dead.

Punk Is Dead gives it a powerful, nearly angry spin. It completely changes the tone of the lyrics, but doesn't seem forced or strained. It's simply a new way of looking at the song.

"Casey Jones" seems an obvious choice for this sort of interpretation - both because of the story the song tells and because it's one of the band's most well known songs. Even people who never saw the Grateful Dead are familiar with "Casey Jones." And it's definitely one of the ones most effective as a punk treatment. This will certainly get listeners dancing in a frenetic state around their apartments, or in their cars, or wherever they are when they listen to this disc. This track is just some serious fun.

"Sugar Magnolia" was almost always cited as a favorite by folks who were just starting to get into the Grateful Dead. Surprisingly, of the six songs on this CD, this one might be the one to work the best as a punk tune. And yes, it includes "Sunshine Daydream" - after a shout of "Oi oi oi." Just great. This is the best track on the CD.

There is a minor, but effective lyric change, in this song. Punk Is Dead sings, "Waits backstage while I scream to you" rather than "sing to you." Indeed.

"Uncle John's Band" is another beautiful song that really, truly should not work as a punk song. It just shouldn't. But it does. The music stops so the line "God damn, well I declare" can be sung acappella - and damn, these guys have good voices. (By the way, that's a line that the Indigo Girls refused to sing when they covered it on the Deadicated compilation. Instead, they sang, "Sit still, well I declare." Ugh.)


Punk Is Dead must be a whole lot of fun to see in concert. It would be great to hear this band cover "Hell In A Bucket" and "U.S. Blues." Both of those songs seem perfect for this sort of rendition, this sort of transformation.

One Hesher, Two Punx And A Hippy is scheduled to be released on October 5, 2010.

(By the way, you might be wondering, "What the hell is a hesher?" I certainly wondered that. So I looked it up. Apparently it's slang for someone who is skinny, has long hair and listens to 1980s hard rock and metal. So there.)

(Note: I originally posted this review on September 28, 2010 on another website.)
Posted by Michael Doherty at 6:11 PM