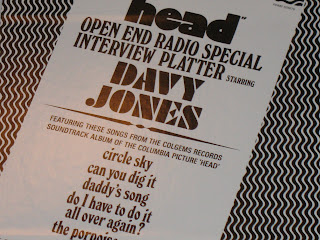 The third disc of this deluxe edition box set contains an interview with Davy Jones from 1968.

Rhino is releasing excellent versions of The Monkees LPs, with lots of bonus material. This year already saw the release of the deluxe edition of the band's fifth album, The Birds, The Bees & The Monkees. And now Rhino has put out an incredible box set of The Monkees' sixth album, Head.

Head is the soundtrack to The Monkees film of the same name, which came out in 1968. The first disc in this three-disc set contains the entire original album, as well as a lot of bonus tracks. The second disc contains all bonus material, including some live recordings of Michael Nesmith songs.

The third disc opens with a minute and a half excerpt from "Circle Sky," written by Michael Nesmith.

In the first section of the interview, Davy talks a bit about the music in the film. He says, "I think they're the best selection, the best group of songs we've ever put together." He mentions how bits of the film's dialogue are on the album too.

He then talks about the film's locations. "We shot mainly in Hollywood," he says, but also at a sewage facility in Long Beach, as well as San Francisco and Palm Springs.

Davy then introduces "Can You Dig It" by talking about the harem scene in which the song is featured.

In the second section of the interview, Davy begins by talking about I.J. Jefferson, the girl who kisses each of the Monkees in the film. He says, "She's kind of a dish actually." I.J. Jefferson also had roles in Psych-Out (1968) and Drive, He Said (1971).

In this section, Davy also gives his reason for his belief that the film will be successful: "We didn't really know what we were doing and we left it to chance, and it worked out."

He also talks about the theme. While acknowledging that each viewer will see it differently and have his or her own interpretation, Davy had this to say: "We're trying to get out of a black box. To me the black box represents society and life. Everybody's locked up in a black box. We all have different ways of getting out." Each of the four members of the group has a different way out.

This is one of the best segments of the interview, as Davy reveals parts of himself, and discusses how that section of the film also reveals aspects of who each of the four band members really are.

The segment that features the song "Daddy's Song" is one of the best parts of the film. In this interview, Davy talks a bit about the song, and introduces it. The song was written by Harry Nilsson, and the dance sequence in the film was choreographed by Toni Basil, who also appears in the film.

Then after the song, Davy says they're going to take a short pause for a commercial. (The commercials are not included on this disc.)

About the music, Davy says, "We seem to be writing more songs because we're not as tied down as we were before." (At the time of this interview, the film had been finished, and the television series was canceled.)

In the fourth segment, Davy discusses the film's war sequence and Ray Nitschke, who has a small role in the film.

He also talks about how the whole thing hasn't been easy, because they've been working solidly from the beginning, with the show and the records. He says, "Nothing's easy, and if it's easy it's not worth doing because it's been done before. It's only because it's hard that nobody's ever done it before. And I think that's what we do in the movie. We do all the parts that people cut out of movies, the parts that they feel they're going to offend people with. The statement is whatever you want to make of it when you sit in that movie theatre."

"Porpoise Song (Theme From Head)"
In that fourth segment of the interview, Davy also talks about the film sequence that features "Porpoise Song," and about the song itself.

He says, "'The Porpoise Song' is about The Monkees. And that ends The Monkees right there, a minute and forty seconds into the movie. That is where you forget about The Monkees, because after this particular song then you're gonna see David, Mike, Micky and Peter as themselves."


This CD is the third disc in the Deluxe Edition Box Set of Head. Disc 1 contains the album and ten bonus tracks. The second disc contains outtakes and rarities. This box set was released through Rhino on October 26, 2010.

Will Rhino continue to release deluxe editions of the rest of The Monkees catalogue? Let's hope so. That would put Instant Replay on deck, and The Monkees Present in the hole (both of those albums being originally released in 1969).