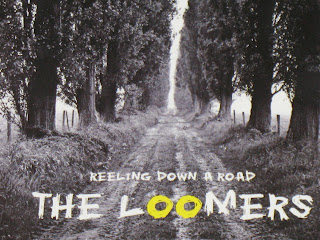 Reeling Down A Road crackles with energy and has a lot of fun rock, but Jon still manages to find beautiful quiet moments.

The Loomers open this album with "Another Desperate Night," an upbeat rockin' number. Listen to that energy crackling in Jon's vocals. This is a great song with which to open the CD, and one that would be a great kick-off number during concert performances.

"Dust It Off" has more of a country feel. It's totally lively. This is another song that must be amazing in concert. It starts off, "In a corner of the attic/Out of sight, out of mind/Stashed behind old coats and blankets/Long gone, hard to find/It sits there like a bad decision taunting you again/Reminding you of what you wished and wanted way back when."

"Not Over You" Is Beautiful
"Not Over You" opens with a quiet, touching part that draws the listener in. Once the song has hold, it then kicks in. And is that a violin in a Loomers song? Holy moly, it's beautiful. This is a wonderful song. Jon sings, "It might take forever, I don't care/I'm not over you/No I'm not over you and I don't want to be."

The Loomers Rock On New Album

"Breaking Out Tonight" is just totally fun. The band is going full throttle. This is unabashed rock 'n' roll, with a good, driving beat.

"Paul McCartney Got It Right"

"Paul McCartney Got It Right" starts off with a quiet piano part. This song has classic Jon Svetkey sensibilities, where he sounds sarcastic and earnest simultaneously.

"Pity Party"
With "Pity Party" the Loomers jump into doo-wop early sixties territory, and it works. Of course, the lyrics are not a throwback to that time. The lyrics start off, "I'm throwing myself a little pity party/I got a handful of Prozac and a fifth of Bacardi/I'm knocking back the sorrow, closing the blinds/I've got nothing worthwhile on my mind."

Love Song To Massachusetts
"Oh Massachusetts" is an acoustic song, harkening back to Jon's folk days. It's a love song to Massachusetts, and it's one of the best songs on the album. In it, Jon sings, "Sing me your folk songs/Fill me with stories/About cities, back roads, rivers and farms/Pray for the pilgrim who came here before me/Oh Massachusetts you're here in my heart."

"As Long As There's Forever" is a song about being a father. It's filled with the particulars of parenthood, and might have limited appeal for those folks without children.

The album closes with the title track, "Reeling Down A Road." It is probably the best song on the album. It's filled with references to End Construction - both song titles, and specific events from those crazy days. All four members of End Construction (Jon Svetkey, Ellis Paul, Jim Infantino and Brian Doser) do vocals on this song.

End Construction broke up in the early nineties, but they have done a few reunion shows over the years. Jon actually did this song at last year's End Construction reunion concert at Passim in Cambridge, Massachusetts.

The End Construction songs mentioned in this song include "Desperate Times," "Friday Night," "Lullabye," "Traffic Lights," "Keep It All In Stride," "Drinking You Tonight," "Just The Jester Fool" and "Everybody Gets The Blues." (For those keeping track, that's two songs by each of the four guys.)

Jon Svetkey - Songwriter
Jon Svetkey wrote all of the songs on this album, with the exceptions of "Another Desperate Night," which was co-written by Everett Pendleton, and "Dust It Off," "Pity Party" and "Ready To Rip," which were co-written by Tom Simons.

The Musicians
The Loomers are Jon Svetkey on vocals, acoustic guitar and mandolin; Everett Pendleton on electric guitar and harmony vocals; Jack Cavalier on bass; Michael Cahill on drums and percussion; Tom Simons on electric guitar; and Rob Laurens on keyboards and accordion.
Guest musicians on this album include Heather Quay on harmony vocals, Steve Sadler on lap steel, Lloyd Thayer on dobro and Jakub Trasak on violin.