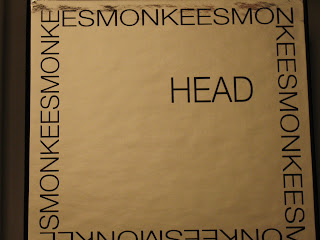 Rhino is going through The Monkees catalogue in chronological order, releasing excellent versions of each LP, with lots of bonus material. This year already saw the release of the deluxe edition of the band's fifth album, The Birds, The Bees & The Monkees. And now Rhino has put out an incredible box set of The Monkees' sixth album, Head.

Head is the soundtrack to The Monkees film of the same name, which came out in 1968. It is also the last album to feature all four Monkees until Justus, which was released in 1996.

The first disc contains the original album, plus ten bonus tracks including nearly 23 minutes of the "Ditty Diego" session.

The album opens with "Opening Ceremony," a pastiche of sounds, dialogue and strange elements from the film, including voices saying, "Head." It leads right into "Porpoise Song."

"Porpoise Song"
"Porpoise Song" is also known as "Theme From Head." It's a beautiful song written by Gerry Goffin and Carole King. Check out these lyrics: "A face, a voice/An overdub has no choice/An image cannot rejoice." How's that for getting right to the problems of being a Monkee?

There is a second version of "Porpoise Song" in the bonus tracks, and that version has that great ending, cut from the original album track. Yes, this version is better than the first version. The end is phenomenal. This was originally released on the second pressing of Monkee Business (1986 - the first pressing contains the single version, and was released in 1982).

"Ditty Diego - War Chant" is the song famous for the band members making fun of themselves, of their manufactured image. It was co-written by Jack Nicholson (yes, that Jack Nicholson) and Bob Rafelson. The Monkees sing, "Hey hey, we are the Monkees/We've said it all before/The money's in/We're made of tin/We're here to give you more."

The film Head is known for deconstructing the whole idea of the Monkees - as a band, a show, an entity. And then starting to build again from scratch, in a way. This song embodies that aim.

The bonus tracks on this disc include two other versions of "Ditty Diego." The first disc concludes with a great track that includes the band members talking about the song as they try to get through it. They joke, they laugh, they go through several attempts. At one point when the session devolves into chaos, Peter Tork starts singing "Take Me Out To The Ballgame."

And Jack Nicholson is on the track as well, giving the band direction on how to sing it. He's then told, "You're losing control, Jack." This track is just under twenty-three minutes, and it alone makes this box set worth owning.

"Circle Sky" is possibly the coolest rock tune the Monkees ever recorded. In the film, it's a live version, but on the album, it's this studio version. Mike Nesmith's vocals should be louder. Michael Nesmith wrote this song. Keith Allison plays guitar on this track.

There is an alternate stereo mix of "Circle Sky" in the bonus tracks, and this version has the vocals at the volume they should be. It was originally released on Monkee Flips (1984).

Tracks 5, 7, 8, 10, 12 and 14 contain bits of dialogue and snippets of music from the film.
"Poll" includes a bit with Frank Zappa, who has a cameo in the film, saying "That song was pretty white." That track also includes that great line, "Nobody ever lends money to a man with a sense of humor."

"Can You Dig It" is very cool, trippy tune with some seriously good jamming toward the end. This is one of the highlights of the album.

There is a second version of "Can You Dig It" in the bonus tracks. Peter Tork wrote this song, and the bonus track has his original recording with his vocals. In the album version, Micky Dolenz sings lead. But this song is Peter through and through, and it's great to hear the way he had envisioned it. Listen to that great bass section. This track was previously unreleased.

"As We Go Along" is the best song from the movie, and possibly the best song of The Monkees career (certainly, one of the best anyway). It's a gorgeous song, with a wonderful folk bent. And it has some excellent lyrics, including these lines: "And you shouldn't be shy/For I'm not going to try/To hurt you or heal you/Or steal your star."

That line - about not trying to heal someone - is wonderful, and a rare idea in music, and in life. And Micky's vocals are perfect on this song.

The bonus tracks include an alternate mix of this beautiful song. This mix was originally released on the Listen To The Band box set (1991) and it includes that great extended ending.

The bonus tracks include a wild remix of "Daddy's Song," with Mike Nesmith adding some silly backing vocals. This version includes a section with just David's vocals and piano - done slowly, in a similar fashion to the style of the film version. It then kicks back in. This version is four and a half minutes long, and was previously unreleased. It is absolutely one of the highlights of this deluxe edition.

The bonus version of this song is an alternate stereo mix. Oddly, this version was already released earlier this year as a bonus track on the first disc of the deluxe edition of The Birds, The Bees & The Monkees.

"Swami - Plus Strings, Etc."
The original album concludes with "Swami - Plus Strings, Etc.," which has a chunk of dialogue from the film. The swami says to Peter, "All belief possibly could be said to be the result of some conditioning. Thus, the study of history is simply the study of one system of beliefs deposing another." It then goes into a reprise of "Porpoise Song" before finishing with some fun string music composed by Ken Horne.

There is an alternate mix of this track included in the bonus tracks.


This CD is the first of three in the Deluxe Edition Box Set of Head. Disc 2 contains outtakes and rarities. The third disc contains an interview with Davy Jones. This box set was released through Rhino on October 26, 2010.