The Monkees: "The Birds, The Bees & The Monkees" Disc 2 Mono 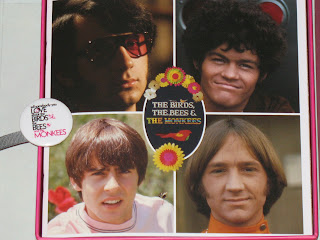 The Monkees' fifth album gets the deluxe treatment from Rhino Records - three discs, 88 tracks. The second disc is the entire mono album and bonus tracks.

For The Monkees' fifth album, Rhino Records went all out, releasing a box set with three discs (for a total of 88 tracks), a book and even a promotional button.

The second disc contains the album in its original mono version, plus eighteen bonus tracks. It's more than 79 minutes worth of music.

The album opens with "Dream World," a song written by David Jones and Steve Pitts. Davy sings, "Why do you lie when you know that /You always get caught/Why don't you come out of your dream world/It's not real." Earl Palmer plays drums on this track.

"Auntie's Municipal Court" is one of the best Monkees songs. It was written by Michael Nesmith and Keith Allison. The lyrics start off, "Fine man, crazy man, he can't see/Sound of the sunset, sound of the sea/Why do the people always look at me?/Nobody here can see that we are you, we are you." Keith Allison plays guitar and does backing vocals on this one.

"Tapioca Tundra" is an excellent song written by Michael Nesmith, complete with Latin rhythms. This strange and wonderful song actually made it to the Top 40.

For most of this record, the Monkees would work individually in the studio on their own songs.

Michael Nesmith is really belting out the vocals on "Writing Wrongs." But it's the instrumental section of this song that is the most interesting, with its manic rhythms and Nesmith's wild keyboard part.

"Ill Be Back Up On My Feet" is an upbeat pop song that is perhaps more like the band's earlier work than any other song on this album.

"P.O. Box 9847" was originally intended to be the follow-up single to "Daydream Believer." It's a very cool song about a man trying to get to the truth of who he is and what he wants through a series of drafts for a classified ad, which he ultimately abandons.

"Valleri" was the next single released after "Daydream Believer." It was written by Tommy Boyce and Bobby Hart and features an excellent guitar part and a great horn section. An earlier version of this song was used in the television series.

Anti-War Song
The album concludes with "Zor And Zam," a great anti-war song about two little kings playing a game, throwing a pageant called War that no one attends. Also included as a bonus track is the TV version of this song.

"Come On In" was written by Jo Mapes. Peter Tork sings lead and plays bass. Stephen Stills plays guitar on this one.

"Carlisle Wheeling" is a wonderful song written by Michael Nesmith. He does lead vocals, and plays guitar, organ and percussion on it. This song also features Peter Tork on banjo.

"Rosemarie" is such a fun song with cool horns. Micky Dolenz, in addition to doing vocals, actually plays guitar on this one. "The Girl I Left Behind Me" is a heartfelt and catchy song sung by Davy Jones. Written by Neil Sedaka and Carole Bayer, it features a nice piano part by Charlie Smalls. "Seeger's Theme" is a weird and brief instrumental written by Pete Seeger. Peter Tork plays banjo and guitar on this one. He also whistles.

"Tear The Top Right Off My Head"

Peter Tork wrote the excellent "Tear The Top Right Off My Head." This version features Micky Dolenz on lead vocals. In the middle of the lyrics, Micky says, "Pick it, Lance." Lance Wakely plays guitar and harmonica on this one. Peter Tork also plays guitar. This is one of the best songs on the CD.

This is a slower version of "Don't Listen To Linda" than was previously released. The different pace, as well as the horns and strings, make this essentially a completely different song. It was written by Tommy Boyce and Bobby Hart. Davy Jones sings lead.

The CD ends with a radio spot for the original release.


This is the second disc of a three-disc box set. Disc 1: The Original Stereo Album & More contains a lot of bonus material, mostly unreleased stereo mixes. Disc 3: The Birds, The Bees & The Raritees is all bonus material, most of which had never been released before. This Monkees box set was released on February 8, 2010.