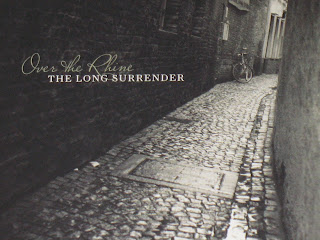 Over The Rhine's new album is gorgeous and haunting and powerful. It was produced by Joe Henry, who also co-wrote two of the songs.

Most albums that have the power to touch people emotionally do so by tapping into the listener's own memories, bringing them to the fore. Reminding the listener of something similar from his or her own life. And so it's partly the song, but also partly the listener's own memories that make the song effective. This album, The Long Surrender, has the rare ability to transport the listener to a completely new world, and simultaneously affect him or her on an emotional level. It's all within the songs. The listener doesn't have to bring anything to it but a willingness to let the music carry him or her - a willingness to delve into the worlds of these songs.

Over The Rhine is the husband and wife team of Linford Detweiler and Karin Bergquist. They've been performing and recording since 1991, so The Long Surrender marks their twentieth anniversary.

Karin Bergquist has said that the album's title is related to their desire to divest themselves of expectations and to remain open. Listeners of this CD should be prepared to do the same.

There are moments on this album that call to mind such diverse talents as T. Bone Burnett, Patty Griffin, Tom Waits, The Cowboy Junkies, Emmylou Harris, Billie Holiday and of course Joe Henry, who produced the album. And yet the album is completely original. It has its own feel, its own rules, its own world.

"The Laugh Of Recognition"

"The Laugh Of Recognition" begins with a deceptively simple rhythm and piano, familiar and yet strange. And then Karin's voice intones from a parallel reality, or from just this side of waking. It's not long before she sings the line, "Everybody has a dream/That they will never own." And you get the idea that she's offering a dream to the listeners - a dream she can't own, but can share. Prepare to dive into her dreams.

"Sharpest Blade" is an incredible song with a haunting intensity. This song is almost frightening, and yet gorgeous. Karin's vocals hold little back, and Linford's piano acts as a second voice. This song also features excellent lyrics. Here is a taste: "But love was aloof/Just a beggar for tips/A mime on whose lips/No promises stood."

"Rave On" is sort of a title track, for the album's title is contained in the song's lyric: "Never give up, never say die/To the long surrender/When the red tail dives."

The liner notes say the song was inspired by the B.H. Fairchild poem "Rave On," but there is also a nod to the Buddy Holly song of the same name in the line, "Blastin' Buddy on the radio."

"Soon" was written by Karin Bergquist and Joe Henry, and this one perhaps more than the others has the mark and feel of Joe Henry's sensibilities. There is something ethereal in the strings, to match the wild ghostly force of Karin's vocals. "Soon" ends quietly with a few notes on the piano.

"Undamned" begins like a folk song - and certainly has that element throughout - but only as far as, say, Emmylou Harris' Wrecking Ball album is country - and in a way this song is reminiscent of Emmylou's "Goodbye" in tone and emotion. Lucinda Williams provides some excellent vocals on this one. Karin and Lucinda sound amazing together.

There is a remarkable beauty to this song, as well as some good lyrics: "I've got a thousand lost songs/(Far too many, they just got away)/I've done a thousand things wrong/(Far too many for me to name)/But I'm not too far gone/To fall/Headlong/Into the arms that love me."

This song ends oddly, as do many of the songs on this album, as if they may drift into another dream, unsure exactly where they should end and let the next take over, or perhaps with a reluctance to end at all. Some begin oddly too, tentatively.

"Infamous Love Song" begins with the line, "I sing the bebop apocalypse." What more can be said? Enjoy this theatrical late-night explosion written by Linford Detweiler.

"There's A Bluebird In My Heart"

"There's A Bluebird In My Heart" was written by Karin Bergquist and Linford Detweiler, and inspired by Charles Bukowski's poem Bluebird. Karin's voice like an intoxicated angel sings, "There's a bluebird with a song/With little effort how she sings it so well/Like a lover with a broken-throated story to tell/I've kept her secret for so long." This song also features some nice work by Levon Henry on saxophone.

"All My Favorite People"

In "All My Favorite People" there is something comforting in the piano playing of Linford, who also wrote this song. This one is the closest to this earth, to a waking state, of the songs on this album. Karin sings, "As for your tender heart/This world's gonna rip it wide open/It ain't gonna be pretty/But you're not alone/'Cause all my favorite people are broken." This song is like a familiar hug after a twisted dream. Levon Henry plays tenor saxophone on this track.


Musicians on this album are Karin Bergquist on vocals and acoustic guitar; Linford Detweiler on piano, vocals, Wurlitzer, acoustic guitar, and electric guitar; Greg Leisz on string instruments; Keefus Ciancia on (this is how it's listed) skeleton keys, lost radio, prepared piano and ship-to-shore orchestration; Patrick Warren on pump organ, iron lung and laptop zither; Levon Henry on tenor saxophone; David Piltch on upright and electric bass; and Jay Bellerose on (again, this is how it's listed) bells and whistles, basement tubs, wooden legs, pocket change and false teeth.

The Long Surrender was produced by Joe Henry. It's scheduled to be released February 8, 2011 on Great Speckled Dog (the band's own label).