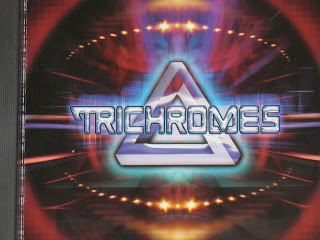 After Jerry Garcia's death, the surviving members of the Grateful Dead went their separate ways for a while, tackling a number of other projects. Bob Weir continued working with Ratdog. Phil Lesh formed Phil Lesh & Friends. Bill Kreutzmann formed the TriChromes.

The TriChromes released just one full-length CD, simply titled, TriChromes. Robert Hunter, one of the two main lyricists for the Grateful Dead, wrote the lyrics for most of the songs on this album.

The album opens with "None So Blind," a sometimes sweet, but always easy rock tune. It's a fairly simple, straightforward song with some nice guitar work. What's surprising is that the lead-off track on an album by a band with Bill Kreutzmann has such a simple and rather dull drum beat. Bill Kreutzmann is an incredible drummer, who usually has a jazzy edge to his grooves and rhythms.

"Iowa Soldier" is a more interesting song, with a good groove and a nice chorus: "Iowa's far away/Don't forsake me for another/Hold on for one more day." It's a song from a soldier who is asking his girl to hold on, that he'll see her when the war is over, no matter which side wins.

"Track 6" is possibly the best song on the album. The song has such a great feel to it, especially the chorus, which is "Train leaving on Track 6/Track 6 to paradise/Track 6 to heaven, baby/Wouldn't that be nice." Train imagery has always worked for Robert Hunter, as has river imagery - this song has both.

"Simply Nowhere" is a cool tune with a great reggae beat and groove.

"Dice With The Universe"
"Dice With The Universe" is a nice tune that was released on the EP of the same name early in 2002. This version is different from the version on the EP. Neal Schon and Ira Walker wrote the music for this one, and though they were both in the band when the EP was recorded, they are not listed as musicians on this CD. (Though they are thanked in the liner notes.)

"Say You're Not Leaving" is the only song on the album whose lyrics were not written by Robert Hunter. (There are two instrumental tracks, which of course also don't have Robert Hunter's lyrics.) Ralph Woodson wrote this song. It has some interesting guitar work toward the end.

"Kick Ass On The Avenue" is a fun rocking tune with nice guitar licks and a bit of a blues edge. Sure, it has a dumb title, but it's a nice unabashed rock song.

"Stop, Drop And Roll" has an interesting drum beat and a cool guitar part, but again this song suffers from a stupid title. And sadly, these lyrics by Robert Hunter are just not up to his usual standards. As an instrumental, this would be a cool song, and in fact the instrumental section is pretty awesome.

The last two tracks are instrumentals. The first, "Impossible Triangle," has a cool, steady bass line and some nice guitar work. It was written by Ralph Woodson. The second, "Knot Of Eternity," fades in, as if from a jam or another song. But this song is itself a jam - a seemingly improvised strange little jam. It's this instrumental that shows more of what Bill Kreutzmann usually does on the drums.

The Trichromes are Bill Kreutzmann on drums, Mike DiPirro on bass, Ralph Woodson on guitar, and Sy Klopps on vocals.


This was the only full-length release by the TriChromes, but they did release an EP, titled Dice With The Universe. This full-length CD was released in July of 2002.