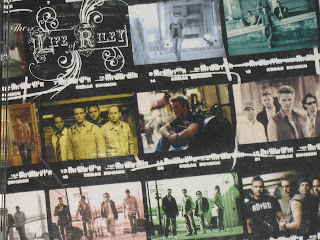 The Life Of Riley's debut album features excellent original material, including beautiful tunes like "Here With Me" and "Forget About Me."

The Life Of Riley was formed in 2006 by Riley Smith and Henri O'Connor. The band's self-titled debut album features some fun rock tunes like "Trouble," as well as some seriously beautiful songs such as "Forget About Me."

"Trouble"
"Trouble," the opening track, begins with the sound of a needle being placed on a record, and the accompanying static (though that is dispatched with quickly). "Trouble" is a fun pop-rock tune written by Riley Smith, Michael Jay and Don Kirkpatrick about instant youthful attraction. It reminds us that getting into trouble is not necessarily a bad thing. This song sounds like summer - when love is immediate, and there are no real thoughts of the future.

"Bang Bang" is a pretty song with some great lyrics, such as "With the smoke still hanging in the air/I'll expose my scars/You've got some bruises of your own/Heavy on your heart/But that won't stop me from shooting for the stars/Bang,bang." This song was written by Riley Smith.

"Short Story Longer"
Think John Mellencamp, but when he was still John Cougar - when it hurt so good, and he needed a lover that wouldn't drive him crazy. "Short Story Longer" is a song about how a fling has lasted beyond its intended duration, and then suddenly the couple wakes up to the wonderful possibilities of a future that they now both want. Thus, the title. It was written by Riley Smith, Henri O'Connor and Michael Jay. Jason Manns and Kelly Smith do backing vocals on this song.

The song "86" is also reminiscent of John Cougar Mellencamp, with its nostalgic look at youth in a small town.

"Here With Me (Palm Trees)"
"Here With Me (Palm Trees)" is a sad and pretty song about how even a paradise can seem ugly and desolate when love is missing from it. Check out these lyrics: "Everyone is saying man you're so lucky/But they didn't see what I left behind/Cause your eyes are bluer than the water and truer than the sky." It ends with these lines: "Cause I'm too blind to see what this place could be/Until you're here with me."

"Forget About Me" is one of the best songs on the album. It was written by Riley Smith and Henri O'Connor, and it's a beautiful and moving song. There is a vulnerable yearning in Riley's voice that is just perfect as he sings, "Tonight I want to forget about me."

A live version of this song is included on the band's Live In Hollywood At The Hotel Cafe album.

"Let's Get Ripped"
"Let's Get Ripped" starts with the sound of a can of beer being opened. A bit juvenile, sure, but this song is an unabashed rock ode to getting drunk, getting laid, and getting crazy. And yes, this song is probably more appealing to those in the 16 to 22 age bracket, but it's hard to not enjoy the youthful enthusiasm of the song. It's just a pure, no-nonsense rock song celebrating the things that rock songs have always celebrated.

"Stay" is a mellow song featuring piano and the vocals. The acoustic guitar, when it comes in, sounds perfect. Riley stretches out vocally on this one, leaving himself exposed in a way, and the song features some interesting changes, wonderful peaks. It was written by Riley Smith.

The album concludes with "She Got A Move," a rock tune dedicated to a girl who has the right move. Sometimes that's all it takes. And like the song says, "You can't explain it, all you say is she got a move." Steve Carlson and Nadia Duggin do backing vocals on this song.

The Life Of Riley is Riley Smith on lead vocals and acoustic guitar, Henri O'Connor on guitar and piano, Steve Dress on electric and upright bass and backing vocals, and Jonah Dolan on drums.
Don Kirkpatrick plays guitar on "Trouble," "Feel For You," "Let's Get Ripped," "Coming Back For More" and "She Got A Move." Jason Gaviati plays keys on "Short Story Longer," "Here With Me" and "Bang Bang." Jason Manus does backing vocals on "Trouble" and "Short Story Longer." Michael Jay does backing vocals on "Feel For You."

The Life Of Riley has released two other CDs: Long Way Home EP (2009) and Live In Hollywood At The Hotel Cafe (2010). The band is based in Los Angeles.
Posted by Michael Doherty at 3:49 PM