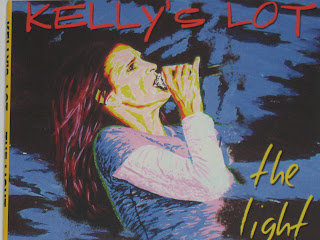 This album from Kelly's Lot features what is probably the coolest song the band ever wrote and recorded: "Redbone."

Kelly's Lot is a Los Angeles rock band that features Kelly Zirbes on vocals. Kelly has one of those kick-ass female rock voices - the kind of voice that kisses your ears, then bites into them, tearing the flesh from your skull, devouring it, before kissing you once again, making it all okay. It's a sort of controlled storm.

All of the songs on this album are originals.

The album kicks off with "Drive," a no-nonsense rock song written by lead singer Kelly Zirbes and guitarist Perry Robertson. Right off the bat, this band shows what it's about, with a delicious howling guitar and a steady beat. Kelly sings, "Life is funny, the way it works/You never know what's gonna hurt." The song features some nice work on saxophone by Bill Johnston, the saxophone adding a cool old rock feel. "Drive" has a great sort of Blues Brothers-type ending.

"Unsure"
"Unsure" is an incredibly cool tune. It features two near-manic instrumental sections that are just wonderful and wild. These sections are so fast that it would be hard to dance to them - just throw yourself against a wall and thrill to the pain. The guitar rules the second instrumental section. The refrain is, "How can I be sure of you?"

"Green Toads" begins with a nice quiet acoustic guitar, easing the listener into the song. The lyrics start, "Black-eyed monsters, green toads and such/Things that little girls are afraid to touch/Your momma told you, 'Be a good girl'/Your daddy promised you the world." And then it kicks in. Kelly's voice has such a raw power, particularly on this song.

"Redbone"
"Redbone" is the coolest tune on the album, and possibly the best song that Kelly's Lot has written (to date). It's just a delightful song, written by Kelly Zirbes. It's a pure pleasure to listen to this one. In addition to Kelly's great vocals, the whole vibe of this one is just perfect.

It's a great surprise too, considering the four songs that came before it. This is not a rock tune, though it certainly has those elements. But it also sounds like something that T. Bone Burnett might have recorded. Or perhaps even Tom Waits.

Also it's got some great lyrics. Kelly sings, "He spoke of always loving me/He talked like you/Now I'm standing in the pouring rain/I've got nowhere to go/And no cover to keep me dry."

"The Light," the album's title track, is a rock song with a driving beat. Kelly sings, "I found a man with a pretty smile/He kept me happy for a little while." It's a harsh and angry song that Kelly's voice is so perfectly suited for, especially as she sings, "You see, he had himself another girl/Yeah, he had himself another world/And I was left out in the cold."

Plus, it has a great harmonica part by Linda Moss.

"Nobody Here But Me"

"Nobody Here But Me" is a cool rock tune written by Kelly Zirbes. Kelly's Lot released another version of this song on their 2009 release Pastrami & Jam.

"Fair" is slightly reminiscent of older rock and roll. The chorus is especially fun: "'Cause your love was never fair/Nothing you ever shared/I know that you never cared for me." But it's a positive song, as Kelly sings, "I'm going to fall in love again." This is one of those songs that inexplicably sounds like summer.

The album concludes with "Say Yes To Life," obviously another song with a positive feel, a positive message. A take-charge-of-your-own-life song, with Kelly singing, "Give it all the best you've got day to day."


Kelly's Lot is Kelly Zirbes on vocals, Perry Robertson on guitars, Bill Johnston on saxophone and clarinet, Rob Zucca on guitar, Mark Drews on bass and Sebastian Sheehan on drums.