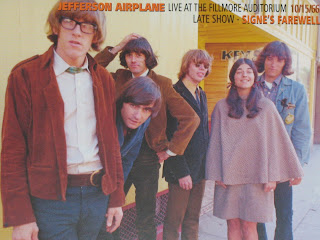 Fans of the 1960s San Francisco music scene can rejoice. Collectors' Choice Music is releasing four albums of live Jefferson Airplane performances. The first, whose full title is Live At The Fillmore Auditorium 10/15/66 Late Show - Signe's Farewell, contains vocalist Signe Anderson's final performance with the band. Most people are aware that Grace Slick was not the original female singer for Jefferson Airplane. Signe Anderson was. This CD release is important for many reasons, especially as it is the first official live concert release with Signe on vocals. As such, it's an important document of the band's early development.

Signe, in all the early photos of the band, seems more wholesome, more innocent, than Grace Slick. But listening to her belt out these tunes, it's clear that her rock goddess self lurked beneath the surface, and came out in performance. It must have been something to see her in concert.

At this point, Jefferson Airplane had one album out, Jefferson Airplane Takes Off, and at this concert they did five songs from it: "Runnin' Round This World," "Tobacco Road," "Come Up The Years," "And I Like It" and "Chauffeur Blues." The band had been together for only a year, but it's clear from this recording that they'd already developed their own sound, powered both by incredible vocals and exploratory jam sections.

Jefferson Airplane shared the bill that night at the Fillmore Auditorium with Butterfield Blues Band and Big Mama Mae Thornton. Tickets were $2.50

Bill Graham introduces the band, saying "Candidates for the Sexual Freedom League, Jefferson Airplane." Then begins the low rumble of the "Takes Off" intro - yes, an airplane lifting off. And the band launches into an intense jam.

One of the characteristics of the San Francisco music at this time was the ability to improvise and to extend songs and venture into new territory. Not just the ability, but the passion for it. And Jefferson Airplane immediately shows its ability and zeal and willingness to take chances. And listen to that bass.

It is interesting that a show featuring Signe's last vocal performance would begin with a nice long jam - an instrumental track.

Jefferson Airplane is a band that always gave it their all - they poured themselves into their music. The passion and earnestness of this band can be heard especially in the vocals. This is a great early version of "3/5 Of A Mile In 10 Seconds," a song that would be featured on their most famous album, Surrealistic Pillow (1967).

Here is a taste of the lyrics: "Do away with people laughing at my hair/Do away with people frowning on my precious prayers/Take me to a circus tent/Where I can easily pay my rent/And all the other freaks will share my cares." Oh yes, those are certainly lyrics from San Francisco, 1966.

"Runnin' Round This World"

"Runnin' Round This World" is a song from their first album, their only record at this point - Jefferson Airplane Takes Off (1966). This song mixes pop and folk elements, making it a lighter song than a lot of the band's material. But it's a fun tune, written by Marty Balin and Paul Kantner.

Jefferson Airplane's rendition of "Tobacco Road" is slightly slower than that by The Nashville Teens. It's heavier, more bluesy, and features excellent vocal performances. "Tobacco Road" was written by John D. Loudermilk.

"Come Up The Years"
"Come Up The Years" is an early great tune by Jefferson Airplane, and one of the coolest songs the band ever did. It has sections that are genuinely beautiful - especially vocally. It was written by Marty Balin and Paul Kantner, and it begins, "I oughta get goin'/I shouldn't stay here and love you/More than I do/'Cause you're so much younger than I am/Come up the years/Come up the years/And love me, love me, love me."

"Come Up The Years" was included on the band's first album. The version of it included on this disc is actually the final live performance of this song. It's one of the CD's best tracks.

"Go To Her" is a great strong dose of rock, a fevered and frenetic performance. This is a song the band never included on a studio album. But here is an excellent rendition.

Paul Kantner sings lead on "Fat Angel," a song written by Donovan Leitch. It was originally included on Donovan's album Sunshine Superman (1966). Jefferson Airplane's version is significantly longer, and though they do sing "Fly Translove Airways" the first few times around, they then change the line to "Fly Jefferson Airplane."

The instrumentation on this song is reminiscent of The Doors' "The End," which wasn't released on an album until early the following year.

"And I Like It"
"And I Like It" is a quiet and seriously cool song. This is one to pull the audience in. It's a bit of blues and a whole lot of passion. Marty Balin's vocal performance is phenomenal. He sings, "This is my time/These are my dreams/And you know I like it." This is one of the best tracks on the CD.

"Midnight Hour"
The beginning of "Midnight Hour" is missing. According to a note on the CD this is due to the original source material. But the portion that is included - just under two minutes worth - is pretty awesome, with some crazy energy. "In The Midnight Hour" was written by Wilson Pickett and Steve Cropper.

The tenth track is simply Marty Balin announcing that Signe is leaving the band. Then Signe says, "I love you. Thank you all, and goodbye." Audience members shout out requests for "Chauffeur Blues."

And the band obliges. As they play the first few notes of "Chauffeur Blues," the crowd erupts in applause. Signe really belts it out, giving it her all. It's an electrifying performance. This was the final performance of this song, as Grace Slick never sang it. "Chauffeur Blues" was written by Lester Melrose.

The final song of the show - and of Signe's time/career with the band - was "High Flyin' Bird," a song written by Billy Edd Wheeler. And it's a great version.

After that, Bill Graham came back on stage and said, "Just this once we're going to be a little selfish and keep the Airplane on and have one big whopper for Signe Anderson." The audience applauds and cheers. And thus ended Signe Anderson's career with Jefferson Airplane.


The very next night, Grace Slick had her debut with the band. That show is also being released by Collectors' Choice Music as Live At The Fillmore Auditorium 10/16/66 Early & Late Shows - Grace's Debut. Two other Jefferson Airplane CDs are scheduled to be released, including Live At The Fillmore Auditorium 11/25/66 & 11/27/66 - We Have Ignition and Return To The Matrix 2/1/68.

All four are scheduled to be released by Collectors' Choice Music on October 26, 2010.