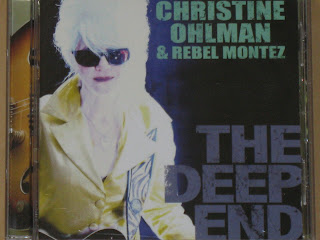 Christine Ohlman, known for being the featured vocalist with the Saturday Night Live Band, releases a new album of mostly original (and really good) material. Ian Hunter, Marshall Crenshaw and Dion are among the musicians featured on The Deep End.

Christine opens this album with "There Ain't No Cure." Ian Hunter performs duet vocals on this song. For those who can't place the name, Ian Hunter was the singer for Mott The Hoople. He also wrote "Cleveland Rocks," which was used as the theme song for The Drew Carey Show (though that version was a cover by The Presidents Of The United States Of America). "There Ain't No Cure" is a good, solid, driving song.

"The Deep End" is an excellent song - more on the acoustic side. The music is great, the vocals are perfect, and the lyrics are superb. Here's a taste: "I told myself I would never surrender/Though I was no stranger to the thrill/Then came the thirst in your eyes, and the twist in your smile/And I hold my heart steady, until/I will jump right in to the deep end of the river of love, love, love."

Ian Hunter does harmony vocals on this song.

"Like Honey" is just a darn cool song. It's simple and mellow and sexy, and has just the right amount of horns. Chris Anderson plays trumpet, and Mark Rivera plays tenor saxophone. Christine sings, "And the world spins 'round; my love pours down/Like honey."

"Love Make You Do Stupid Things" is bluesy rock. While this song is still good, it's less interesting and less effective than the quieter songs. "Bring It With You When You Come" is also standard fare in the bar rock vein. It's fine, but not very original, especially compared with other material on this album.

Duets With Dion DiMucci And Marshall Crenshaw
A church organ starts the soul song "Cry Baby Cry." Dion DiMucci does duet vocals on this song. Yes, Dion from Dion & The Belmonts. It has a cool spoken section less than two minutes in, with a reference to "Tears On My Pillow." It might seem cheesy, but that's okay. It works.

Marshall Crenshaw does duet vocals with Christine on "What's The Matter With You Baby." He also plays electric guitar on that song.

The lyrics include, "Marking time to high-heeled shoes, from baby dolls to women's blues/A little wise, but not that much/Girl, growing up."

"The Gone Of You"

The last song is listed as a bonus track. But since this album was never released before, how can it really be a bonus track? Well, no matter. It's another version of "The Gone Of You," and this version might even be better. It really highlights the yearning in Christine's voice and in a sad and perfect way. A wonderful way to end the album.