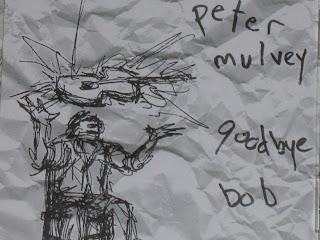 Goodbye Bob is a five-song EP released in 1997. It's only seven minutes and sixteen seconds long, but a lot of Peter Mulvey magic is packed into there.

The first song is "Sign 'O'The Times," and it features that great low and loose-sounding guitar that Peter is famous for.

"If Love Is Not Enough" is a great song. But this is the same version released on Peter Mulvey's 1995 release Rapture. It's one of Peter Mulvey's best songs, but it would have been great if there had been a live version on this EP instead of an already-released track.

"Deep Blue" of course is the name of the chess-playing computer that was developed by IBM. The lyrics include, "Do you ever wonder if you'll ever know the taste of skin?/oh, believe me, your loss was no sin/and even if you win someday, even if anything/how does it feel to know, tell me, how do you feel?"

The live version of "On The Way Up" was recorded at Johnny D's, a club in Somerville, Massachusetts, in July 1996. The original studio version can be found on the album Rapture.

The fifth and final song on this EP is a live version of "The Dreams." This recording was from a concert in Vermont in November of 1996. It's a really cool song about the subways. He introduces the song by saying, "This is a song I wrote about the subway. I didn't really play it in the subway, and you'll see why. It's kind of a bit much for people at 9 a.m. on their way to work is what I think it was."

Peter Mulvey is one of the musicians who would perform regularly on subway platforms under the cities of Boston and Cambridge. He even recorded down there.

The other musicians on this EP are Goody on electric guitar and mandolin, Jackson Cannon on bass and mandocello, and Mike Piehl on drums.

Posted by Michael Doherty at 3:17 AM