The Grownup Noise: "This Time With Feeling" (2011) CD Review 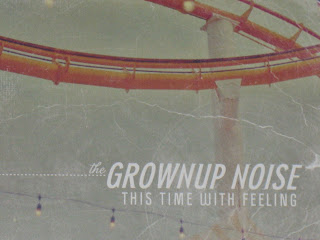 This Time With Feeling has everything I've come to expect from The Grownup Noise: great vocals, a subtle and sometimes sly sense of humor, interesting and original lyrics, and well structured songs. All of this album's songs were written by Paul Hansen. Different versions of four of them appeared on an earlier release, an EP titled Shall We?

At times this album reminds me of Belle And Sebastian, mostly in song structure, but also in tone. Lead singer/guitarist Paul Hansen has such a great voice - honest, playful, like a friend who won't steer you wrong.

The album opens with "Strawmen," which has a mellow, almost timid intro, with sparse notes at the high end of the piano, some soft playing on cello, and a bit of strumming on the guitar, as Paul sings, "Seeing in double the saints play your tune/dreams of your maker they fall in on you." And then it kicks in beautifully - the cello and piano leading gloriously into the main body of the song, like a herald bursting onto the field of battle. And then the drums come in with a wonderful, joyous force. This song features great lines like "pushin' the air between my busted teeth."

"Strawmen" was also the opening track on Shall We?

At times this song has a straight-ahead rock rhythm, but the moment you think this song will be a straight rock tune, it surprises you. There is always a lot going on in this band's songs. That is not to say the songs are dense or cluttered, for they're not. It's more that there is a lot to sink your teeth into.

"Flower" is one of my favorites. It's more in a folk vein. This song is a good example of the band's sense of humor, for some of these lines and thoughts are funny, but they're sung earnestly and beautifully - almost sadly. The cello, of course, adds to that feeling as well. Check out lines like, "a flower is a strategy only good for I'm sorry please/like nature's bubble gum ring fun when you're seventeen." (This band reminds me a bit of the books of John Irving, where sometimes the funniest bits are in the saddest, truest moments.)

"Carnival" is probably the album's best track. It's fun, with an almost bouncy rhythm to the vocals as well as the guitar and bass. There is a definite joy here, and it transfers easily from the singer to the listener. "Carnival" has wonderful lyrics, like, "She said you fell drunk into me and screamed out into the street/'We’re all just here to compete/and that a girl wants a guy to mistreat'/Well she laughed most suddenly, he fell back into his seat/And dreamed of his hands on her feet/He said 'do just what you want, give me what you got cause’ I’m feeling fit for the roast.'" Each time it kicks back in, it's a relief that the song is not over, like after the line, "drink one for me because some of us were meant to be alone."

"Six Foot Solemn Oath" has a second set of lead vocals, provided by the band's cellist, Katie Franich. Her vocals work in response to Paul's, like a conversation. And when the voices come together nearly two minutes in, it's a wonderful moment. Two separate voices becoming one on the line, "down there must be cold, a six foot solemn oath." It's beautiful, and then soon the xylophone comes in. A lot of folks are using the xylophone these days, and I for one am glad for it. That's Adam Sankowski on the xylophone, by the way. The cello sounds more like a violin toward end, over the shuffle-like rhythm on the snare. Just wonderful.

"The Artist Type" is another of the CD's best tracks. I particularly love the piano on this one. This song has some interesting changes; everything just comes together perfectly. This isn't really a happy song, and yet it has moments of odd hope and optimism, with lines like "when beauty is gone will you come back to me/you sung every song you could possibly need/you suffer the same thing, every tree is another thing you could be/drowned in sorrow calling me from the middle of the street." These are great lyrics. And it ends quietly with just the vocals on the repeated line "from the middle of the street."

"The Same The Same"

"The Same The Same" is a bit choppy with its starts and stops and its sudden loud bursts. This might be the least effective song on the album, and yet it's still intriguing. The vocal line, for example, is powerful and original on lines like "I want just once a feeling to remain the same the same/add one to one you always get the same explain explain/please just don't say you leave it up to fate."

"So It Goes" starts more in the folk realm, with vocals and acoustic guitar. The bass comes in like a deep, wise voice that has a few things to say and says them well. Part of the cello line is reminiscent of some of the later Beatles work. It's nearly two minutes before the drums come in, keeping a steady rhythm.

As does the entire album, this track feature excellent vocals and lyrics. Here is a taste: "There's a fault line between all of us/I've been lucky each time/still you look at me with a worried curiosity/but I don't believe it and I can't hardly wait/to prove everyone wrong/cause I'll pick a side no one is on." "So It Goes" is another of this CD's many highlights.

"Just So You Know" is the closest thing to a pop tune on this album. And "Attention" is also a happy, peppy tune, with handclaps and a reference to The Breakfast Club. John Sanders andd Beth Hansen contribute backing vocals to that track.

The album ends with a short, mellow tune titled "Somehow We Escaped." This song is vocals and guitar, and has a completely different feel from the rest of the album. Here is a bit of the lyrics: "chaos or fate well somehow we escaped/but the creature was free and chased us to eat/so anxiously we sipped our tea/and danced our last gently."

The Grownup Noise is Paul Hansen on lead vocals and guitar; Adam Sankowski on bass, piano and backing vocals; Katie Franich on cello; Aine Fujioka on drums; Kyle Crane on drums; and Todd Marston on keyboards.

Joining them on this recording are Tomoko Omura on violin on "Just So You Know," Scott Solter on...well... lots of interesting sounds (he also mixed the album), Jerry Sabatini on trumpet on "Attention" and "The Same, The Same," and Mike Ringquist on percussion on "So It Goes."

The Grownup Noise had their CD release party for This Time With Feeling on March 26, 2011, and the CD was officially released in April. The Grownup Noise have also released a self-titled full-length CD, and an EP titled, Shall We?
Posted by Michael Doherty at 8:41 PM