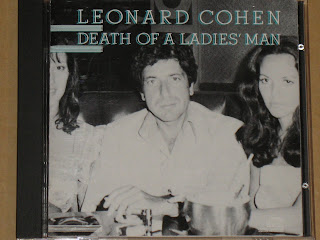 Leonard Cohen's fifth studio release, Death Of A Ladies' Man (1977), is largely ignored, by fans, by CD collections, by other performers and by Leonard Cohen himself.

With nearly 2,000 covers of Leonard Cohen songs available to listeners, it's interesting to note that this album provides the fewest covers. Artists are reluctant to cover songs from this record.

This album is also forgotten when it comes to greatest hits packages.

For The Essential Leonard Cohen, with thirty-one songs on two discs, not a single song was chosen to represent this album. In contrast, five songs were included from The Future, and four songs were included from Ten New Songs. An earlier greatest hits package, More Best Of Leonard Cohen, also ignored this 1977 release, focusing more on songs from I'm Your Man (1988) and The Future (1992). (The first Best Of album came out in 1975, and so obviously did not include any songs from it either.)

Leonard Cohen himself seems to want to forget this album. On his recent 2008-2009 tour, in a three-hour performance, Leonard Cohen did not play a single song from this album. Why not? (Oddly, the only other album he ignored was his most his recent studio release, 2004's Dear Heather.)

Like all of his albums, the lyrics on "Death Of A Ladies Man" are incredible. But this release was co-written and produced by Phil Spector, and his signature is certainly on the arrangements. While the lyrics are still very much Leonard Cohen's, the overall sound is louder, fuller, and often overpowers the vocals.

Or these from "Iodine": "I needed you, I knew I was in danger/of losing what I used to think was mine./ You let me love you till I was a failure/ Your beauty on my bruise like iodine."

Or these from "Death Of A Ladies' Man" (the 9-minute title track): "And the last time that I saw her/she was living with a boy/who gives her soul an empty room/and gives her body joy."

Surprisingly, on the liner notes for this album, Spector's name comes first for songwriting credits on all of the songs. Was this his choice? Or was Leonard Cohen already trying to distance himself from this album? Rumor has it that Spector actually barred Cohen from the studio during the end of the recording process.

The album was certainly a departure from the more pared-down, folk sound of Leonard Cohen's first four studio releases. Though one might hear a possible leaning in this direction on his fourth album, New Skin For The Old Ceremony.

This album is notable for the people brought in to do backing vocals.

"True Love Leaves No Traces," "Iodine" and "Memories" feature backing vocals by Ronee Blakley (yes, the woman from Nashville and A Nightmare On Elm Street). She had also appeared on Bob Dylan's 1975 release, Desire.

"Memories" is really the only song on this album that was performed regularly in concert. A great version of it can be found on Field Commander Cohen (2000), that version from a concert in 1979, with a very different-sounding arrangement.

After Death Of A Ladies' Man, Leonard Cohen returned to a more pared-down sound with his next release, Recent Songs (1979). But after that one release, he once again returned to a full band sound with Various Positions (1984), I'm Your Man (1988) and The Future (1992).

Leonard Cohen's sound has gone through many changes over the years, as has his voice (it's become deeper and deeper). It's easy to understand why Leonard Cohen fans in 1977 were quick to dismiss this record as too great a departure from his folk sound. But now with all of the different sounds of succeeding records, it's time to give this record another listen, another chance.