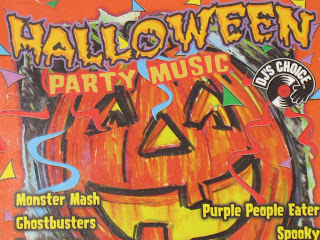 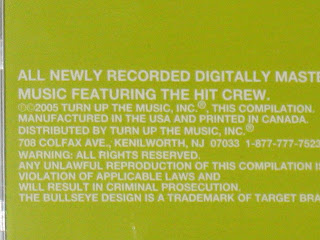 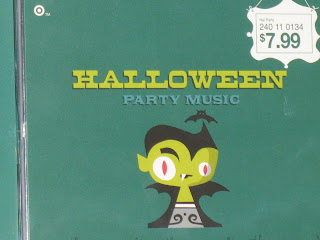 This CD contains cover versions of some fun Halloween-related songs.

Every year in October, a number of Halloween-themed CDs are released. A lot of these are decent compilations of good songs done by the original artists. But some of them are cheaply made knock-offs.

And every few years an album titled Halloween Party Music is released with a new cover. This album does not have any of the original artists. In fact, nowhere on the cover or liner notes of the 1998 release does it say who is actually on the recording. What it says on the back is, "ALL NEWLY RECORDED DIGITALLY MASTERED MUSIC." That sounds nice, but the part to pay attention to is "ALL NEWLY RECORDED." That's code for "not-the-original-artists."

On the 2005 edition, which contains the exact same recordings, the back was changed to read, "All Newly Recorded Digitally Mastered Music Featuring The Hit Crew." There is no clue about what musicians and singers make up The Hit Crew, but it seems that different singers are used for different songs, as they try really hard to hide the fact that these aren't the original recordings. So they make an attempt to have the singers replicate the sound of the original singers.

The first track begins with approximately thirty seconds of Halloween sound effects before going into "Monster Mash." Whoever is singing lead does his absolute best to imitate Bobby "Boris" Pickett, who did the original version of the song. But he's not quite able to pull it off.

"Ghostbusters" is the theme to the 1984 Ivan Reitman film of the same name. It was originally recorded by Ray Parker, Jr., who had a number one hit with it. The version on this release is not nearly as good.

"Purple People Eater" is a very silly song. It was originally done by Sheb Wooley, who also wrote the song. This Hit Crew version tries to replicate the original, even including the reference to "Short Shorts," and the reference to "Tequila" at the very end.

The original version actually reached the #1 spot on the charts in 1958. Ah, times sure have changed.

This version of "Werewolves Of London" will irritate the heck out of anyone who is a Warren Zevon fan. The singer is really doing his best to sound like Warren Zevon, who released the original version in 1978, but just fails. He even includes the "Huh, draw blood" bit.

Okay, "Rock Lobster" is definitely an interesting choice for a Halloween mix. It's an insanely cool song, originally by The B-52s. This song even has its own dance, which people don't seem to remember anymore (but when on the dance floor, give way to those few who still do it).

This song was the first single released by The B-52s, and it reached #56 on the Billboard Hot 100. It was also included on the band's self-titled debut LP.

The version on this CD isn't that bad. It's one of the more successful attempts on this album to capture the feel and fun of the original.

And the version included on this compilation is actually really good. But what does this song have to do with Halloween?

At least "Disco Inferno" could be construed as loosely related to Halloween. After all, "inferno" is another word for "hell."

"The Time Warp" is the most famous song from The Rocky Horror Picture Show. This song is a dance, and every weekend folks around the country are standing in the movie theatre aisles and doing it. For those who don't know, "It's just a jump to the left/And then a step to the right/Put your hands on your hips/You bring in your knees in tight/But it's the pelvic thrust that really drives you insane."

This version is pretty bad, particularly during Columbia's tap dance bit. It's difficult to discern just what they used in their attempt to duplicate the sound of tap shoes, but boy, it sounds terrible. It seems like someone is just hitting one pre-programmed key on a synthesizer. The drums sound like a drum machine too. But for Rocky Horror fans who like to have all versions, this CD will be a strange addition to the collection.

By the way, on the 1998 version of this release, Richard O'Brien's name is spelled incorrectly (as "R. O'Brian").


There are other CDs like that to watch out for. One is titled Halloween Dance Party Music, but at least on that one it says, "Performed by The Tombstones" right on the cover.

There are some good Halloween compilations, including Haunted Hits: An Hour Of Scary Songs & Sounds. For other choices for a Halloween party, there are a lot of fun songs from the 1980s that fit the bill, as well as some classic choices and newer, lesser known songs.
Posted by Michael Doherty at 8:16 PM