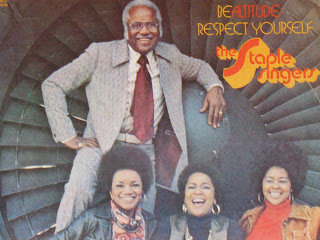 The Staple Singers started in the early 1950s as a gospel group. They then began recording folk tunes, and basically created a genre called "soul-folk." In 1968, the band signed to Stax Records, where they recorded two albums with Booker T. & The MGs: Soul Folk In Action (1968) and We'll Get Over (1969). After that, Al Bell began producing the group's records, and the band moved closer to funk.

The band is probably best known for "I'll Take You There" and "Respect Yourself," both of which were included on the 1972 release Be Altitude: Respect Yourself. That album has now been remastered and includes two bonus tracks as well as new liner notes.

Be Altitude: Respect Yourself has great energy, incredible vocal work and, yes, a message. This is an album to make you feel good all over. The next time you throw a party, but sure to play this disc. Sure, there are a lot of religious themes contained in the lyrics, but that's not necessarily a bad thing.

Be Altitude: Respect Yourself opens with "This World," which is glorious funk. This wonderful mixture of gospel, soul and dance was written by Herb Shapiro and Gary Friedman. Yes, it gets a bit repetitive, but so what? It's more about the beat and energy than the lyrics. Though the line, "My mind holds this world in its hand" is pretty interesting. This song reached #6 on the R&B chart, and # 38 on the Billboard Hot 100. It was previously recorded by The Sweet Inspirations.

"Respect Yourself" is admittedly "message" music, but if the message is positive, and it's wrapped in a great groove, then yes, bring it on. I'm all ears. Written by Mack Rice and Luther Ingram, this song features lyrics like, "If you're walking around thinking that the world owes you something 'cause you're here/You're going out the world backwards like you did when you first come here."

Once past the somewhat cheesy intro, "Name The Missing Word" has a damned good funky rhythm. It also boasts some excellent vocals, particularly on lines like, "You're always ready to accuse someone/Never knowing what they've done." This is one of the most interesting songs on the album, with notable changes.

"I'll Take You There"

"I'll Take You There" was a big hit for The Staple Singers. It has a great reggae rhythm. Lyrically there isn't much happening. Mostly it's the repeated line, "I'll take you there." And yet vocally the song is a triumph. Mavis Staples really shines, improvising all sorts of wonderful (and sexy) non-verbal sounds. This song features Ben Cauley on horn. It's so catchy, and a whole lot of fun to dance to. "I'll Take You There" was written by Alvertis Isbell.

"Are You Sure" is a song that encourages folks to take a better look at themselves, at their own capabilities for improving this world. It starts with the lines, "Are you sure there's nothing you can do/To help someone worse off than you/Think before you answer/Are you sure." It also has a groove as good as that of "Son Of A Preacher Man." And there is more great vocal work on this one, particularly when she repeats, "Are you sure?"

"Are You Sure" was written by Homer Banks and Raymond Jackson, the team who also wrote "I'm Just Another Soldier."

"Who Do You Think You Are (Jesus Christ The Superstar)?"

"Who Do You Think You Are (Jesus Christ The Superstar)?" is a religious tune whose lyrics would turn me off if they weren't sung by this great band, and to such a cool groove. Written by Roebuck Staples, this song starts, "Oh, when you're hungry/So down and out/You can go to Jesus/There's never no doubt/He's the bread of life/And the star of the land/Hold you and me/In the palm of his hand." And then they sing, "Somebody said, 'Who do you think you are?'/He's Jesus/He's a superstar."

(For those who are curious, Jesus Christ Superstar, the rock opera by Andrew Lloyd Webber and Tim Rice, debuted in 1971. "Who Do You Think You Are" is not related to that opera.)

The original album ends with "Who," another gospel-themed song. Written by Jeff Barry and Bobby Bloom, this song features lines like, "Where's this world going/And who will show the way" and "And when your soul is searching/Whose name feels good to say."

This re-issue features two bonus tracks, both previously unreleased. The first is "Walking In Water Over Our Head," a high-energy song written by Oscar Franck, Phillip Mitchell and Terry Woodford. It features more excellent vocal work.

The second bonus track is an alternate take of "Heavy Makes You Happy." Written by Jeff Barry and Bobby Bloom, the original version was a hit single for The Staple Singers in 1971.

The Staple Singers are Roebuck "Pops" Staples on guitar and vocals, Mavis Staples on vocals, Cleotha Staples on vocals and Yvonne Staples on vocals. Joining them for this recording are Eddie Hinton on lead guitar, Jimmy Johnson on rhythm guitar, David Hood on bass, Barry Beckett on keyboard and Roger Hawkins on drums.

Be Altitude: Respect Yourself is scheduled to be released on May 10th, 2011 through Concord Music Group as part of the Stax Remasters series. Two other discs from this series will be released on the same date: Johnnie Taylor: Taylored In Silk and Booker T. & The MGs: McLemore Avenue.
Posted by Michael Doherty at 2:52 PM