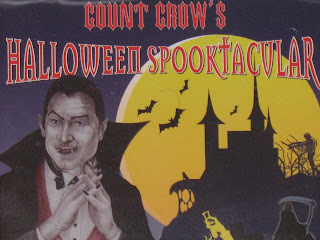 This a wonderfully silly and fun Halloween album of original compositions by Matt Crowe.

Halloween is the best holiday. And while there is quite a bit of good music to play on that night, rarely is an album released that features completely new Halloween tunes.

Count Crow's Halloween Spooktacular is an entire album of original Halloween songs. It's a great mix of genres and tones, all designed to be played at a Halloween party. Yes, finally, a whole slew of new songs to play at Halloween. And the best part? These songs are fun. They've got a playful sense of humor which is just right for a party on Halloween night.

The album opens with "Shout The Boo," a goofy dance tune with a hip hop flavor, sung with a vampire-type voice. It begins with a few seconds of eerie Halloween sound effects, and an introduction: "Good evening. I am Count Crow."

"Shout The Boo" is a song about a vampire searching for his posse - the mummy, werewolf, Frankenstein's monster, and so on. It's just pure fun, a perfect song to have on at a Halloween party.

"The Ghoulie Hop" is custom-made for a Halloween party, especially one where folks will be dancing. It's got an early rock feel, and it mentions all the usual Halloween characters. This song urges its listeners to "Party till the dawn at the ghoulie hop."

"You Won't Survive" is a parody of Gloria Gaynor's "I Will Survive." It's a sort of love song from a vampire to his victim. Well, not really a love song at all, is it? But it's absolutely wonderful. And, like "Shout The Boo," it's sung with a vampire-type voice.

The vampire sings, "You should never let me in/You should have garlic around your chin/Had you known for just one second that your future looked so grim." And, "You've got so much blood to give/It's a shame that you won't live."

The original song, "I Will Survive," was written by Frederick Perren and Dino Fekaris. It was released in 1978, and has been a staple at disco dance clubs ever since.

"Reaper Man" is a rap song from the perspective of the grim reaper who is something of a braggart. And why wouldn't he be? After all, as he boasts in the last line of the song, "No one gets away from the blade of the reaper man."

The fifth track, "Arise," is a short track of sound effects with the command, "Arise." It leads right into "Disco Mummy."

"Disco Mummy" is, as one might guess, a disco song. It creates the wonderful image of the mummy - the character whose movements seem the most impeded of all the main Halloween players - out there on the dance floor. And it's actually a fun disco tune. (The end of this song always makes me laugh.)

"The Ghost Of Baton Rouge"

"The Ghost Of Baton Rouge" is probably the coolest tune on the CD. It's sung as if by a 1960s male vocal group, with the vocals over a nice rhythm and the static of an LP. It tells the story of a vigilante ghost.

The chorus is, "So you better watch out and make sure your heart is true/'Cause if you're badder than bad, then you know he's coming for you/The ghost of Baton Rouge."

"The Ghost Of Baton Rouge" features Troy Horne on vocals.

"Dr. Jeckyll Mr. Hyde" has a hard rock feel. Think Deep Purple in the 1970s, but with the attitude of The Cramps. This song is about that famous split personality, and it's sung from a bizarre union of the two. "When we see pretty people our heart fills with rage." But don't judge Jeckyll and Hyde too harshly; after all, "We just can't help ourselves tonight."

"Witch Doctor" is a reggae-flavored song about an island witch doctor who offers "a little bit of voodoo." This song is driven by the percussion, and also features Troy Horne on vocals.

This "Witch Doctor" is not to be confused with the 1958 David Seville song of the same name. (Both are good tunes for a Halloween party.)

"House Of Fate" starts with piano, and the instrumental section sounds like something from the soundtrack to one of the later A Nightmare On Elm Street sequels. It's an eerie tune that lets folks know, "There's no escape." It also features the repeated sound of a knife being sharpened.

"Halloween Trance" is a techno dance tune that at moments is a bit reminiscent of Dead Or Alive's "You Spin Me Round (Like A Record)." When the majority of folks at the Halloween party are on the dance floor, put this one on. Though there needs to be an extended DJ remix of this tune, as it's only four minutes long.

The CD's final track is just the shout, "Creatures!"


All of the songs on this release were written by Matt Crowe (Count Crow) and Trevor Huster.

This CD was released on October 5, 2010 through Honur Records.

Count Crow's Halloween Spooktacular is an excellent addition to a Halloween music collection. For folks looking for more Halloween party music, there are several classic Halloween songs, as well as some more recent, though lesser known tunes. There are also a lot of fun Halloween songs from the 1980s. There is also the compilation Haunted Hits: An Hour Of Scary Songs & Sounds.
Posted by Michael Doherty at 12:48 PM