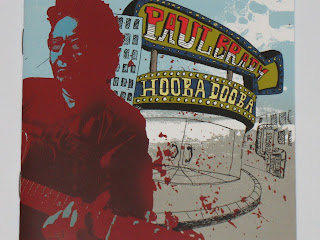 Paul Brady has been on the music scene since the 1960s. He played with the Irish band The Johnstons and then Planxty before embarking on a solo career in the 1970s. Hooba Dooba is his twelfth solo album. And his voice is one of experience.

Paul Brady is not married to any one musical genre, and so these songs cover a wide range of tones and emotions. Though perhaps also because of this, the album is a bit uneven. But when it's good (which is more often than not), it's very good. Most of the songs are originals, and a few of them - particularly "Follow That Star" - are among the year's best songs.

Hooba Dooba opens with a really strong track titled "Cry It Out." It's like country folk with a funky edge. It has a lively full band sound, and all the exuberance that goes with it. This song also features wonderful lyrics like, "It doesn't matter if it's good or bad/None of this was meant to last." You can take those lines as you will. Are they positive? Are they negative? And those are followed by "This too shall pass," the one sentence that's true in all occasions. Though the lyrics may be ambiguous, the song has a seriously positive vibe.

But now you can add another really good tune to the list. Paul Brady's "Rainbow" is one of my favorite songs on this album. It's got such a happy feel to it that you can't help but love it. And Jerry Douglas plays lap steel guitar on this track.

Here is a taste of the lyrics: "It's like I see you for the very first time/And something's happened in this/mixed-up heart of mine/Used to be I looked at you/The only colour I could see was blue on blue."

"The Price Of Fame"

"The Price Of Fame" is one of the album's weaker tracks. Maybe because it's hard for most of us to feel bad for those who "pay the price of fame" - especially when most of us have trouble paying the price of gasoline. It's also got kind of a cheesy vibe to it.

"One More Today" is an unabashed love song featuring mostly piano, vocals and strings. It reminds me a bit of some of the soft side of 1970s pop, or perhaps even a love song from a musical. In this one, Paul sings, "One more today/Waking up inside your heart/One more today/With your kiss the perfect start/To a miracle of love that moves me/More than words can say." Cheesy? Sure. But you have to admit that we all want to feel what he's expressing in this song.

"The Winners' Ball" is an odd mix of soul and pop that doesn't quite work for me. (But that might be due to my annoyance when anyone uses the word "invite" as a noun.)

"Luck Of The Draw"

"Luck Of The Draw" is a much better tune, and one that will be familiar to most music fans. It was the title track to Bonnie Raitt's excellent 1991 release. Paul Brady wrote it, and this is actually the first time he's recorded his own version. It's interesting, because on the one hand the song is about chance and fate, and thus things being out of our hands. But then on the other hand the song seems to urge folks not to give up, to keep trying. It ends with, "Your day is coming." Ultimately it is a very positive song.

(By the way, Paul Brady also wrote "Not The Only One" from that same Bonnie Raitt album.)

"Follow That Star" is a great powerful raw-sounding acoustic song, one of the CD's best tracks. It's just a damn good song. Paul's vocals are phenomenal on this one. And the song has a great steady rhythm. Here is a bit of the lyrics: "Jezebel's a lovin' junkie/She can't do without a man/Fuss 'in' fight holdin' on tight/Till he slip right through her hand." I love this song.

"You Won't See Me" is of course a Beatles cover, the original being from their 1965 release Rubber Soul, and written by Paul McCartney. Paul Brady's take on it is very different. It took me a few times through to shake the Beatles recording from my head and really appreciate this version. But now I totally dig it. He captures the energy of the original recording while putting his personal spin on it. This is the album's only cover song.

Hooba Dooba ends with "Living The Mystery," which has a gentle feel. It certainly has a bit of country to it, with lyrics like "And when I hear that lonesome train whistle blow/Then I know it's time for me to go/I been round this cold hard town too long/There's so many roads a man could go/Roads that glisten in the night like diamonds." This song features some really nice vocal work by Paul. The perfect track to close the album.

Hooba Dooba was released on May 24, 2011 on Proper American Records.
Posted by Michael Doherty at 11:06 PM