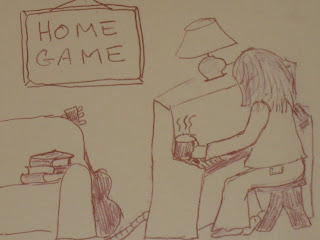 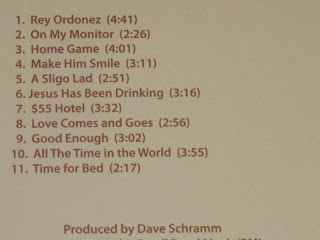 Kate Jacobs' first album in seven years contains sweet and often touching songs of home life, as well as a great song about being on the road.

There is something instantly likable about Kate Jacobs' voice. It has an honest sweetness to it. Maybe that's also due to its having something of a young-girl quality. And it's partly because of that quality that these songs come off so well. It's also because of that quality that certain songs come as wonderful surprises, like "$55 Hotel," in which she tells a man that he "can just go to hell."

Home Game is the first CD Kate Jacobs has released in seven years. So what has she been up to these past seven years? These songs will tell you.

The majority of these songs are about raising her children. Actually, they're like love songs to her children, to her family. While not a children's album, the music on this CD was certainly inspired and shaped by her experiences starting a family.

All of these songs are originals, written by Kate Jacobs. ("Home Game" was co-written by Dave Schramm.)

The album kicks off with "Rey Ordonez," a song which lovingly lists baseball players. All the players in this song were on The Mets in the 1990s: Jose Vizcaino, Carlos Baerga, Bobby Bonilla, Edgardo Alfonzo, and of course Rey Ordonez. She sings, "They were our friends on the radio."

First off, who doesn't love a woman who loves baseball? Okay, sure, the song is more about her band on the road late at night after a gig. But still, it's a treat for baseball fans. And when the song kicks in, it does so with such a joyous force that it's immediately a favorite. This is a song with the best pop sensibilities. "Rey Ordonez" is one of this CD's highlights.

The song ends with a snippet from a radio broadcast of a game, which mentions Ordonez.

This song feels like the end of a day, when the world becomes just one's immediate surroundings, one's home and family. It has that comforting sort of sound and vibe.

Drummer Paul Moschella's daughter Sophie is audible at the end of the song.

"Home Game" was written by Kate Jacobs and Dave Schramm.

"A Sligo Lad" has a cool jazzy feel. And it contains references to William Butler Yeats and James Joyce. By the way, Sligo is a town in Ireland. Kate sings, "He's like this crazy Irish weather/Ever since we've been together/I just never know/How the wind will blow."

Kate's voice is especially adorable on this one.

Here is a taste of the lyrics: "Everyone knows him as Jesus/But nobody knows him at all/His presence among us has pleased us/Til Jesus hit the wall."

"$55 Hotel"
A country-rock tune, "$55 Hotel," is a song about cheating. Well, it's actually about discovering that one's spouse has been cheating. Kate sings, "A lot of nights you've been working late/The kids and I get by/What I want to know is what kind of a hotel costs $55 a night."

This song has a wonderful exuberance, particularly in the chorus. It also has some great play on words, like the double meaning of "cheap" in "It's a pretty cheap way to say goodbye after seventeen years of 'I love you.'" This is one of the best tracks on the CD, and is an example of how this is not a children's record.

How is that for honesty in a love song? And listening to Kate's delightful voice, one gets the sense that this relationship has a much better chance of lasting than most.

Home Game concludes with "Time For Bed," a short and somewhat goofy song about tucking the kids in and going to sleep. Kate sings, "Were sweeter words ever said/I wait all day just to hear somebody say/Isn't it time for bed."

Guest musicians include Andy Burton on piano and organ, Claudia Chopek on violin, Tanya Kalmanovich on viola, and Eleanor Norton on cello.

Home Game is scheduled to be released January 25, 2011 on Small Pond Music. This CD was produced by Dave Schramm. (Dave Schramm will be familiar to many as the lead guitarist for Yo La Tengo in the band's early years. He's also played with The Replacements, Freedy Johnston and Richard Buckner.)