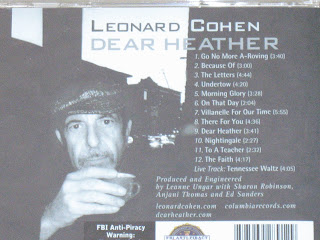 A new Leonard Cohen album is always cause for celebration, and this CD is no exception.

This is Leonard Cohen's first studio release since 2001's Ten New Songs. On this album he got some help from long-time collaborator Sharon Robinson, and also from Anjani Thomas.

The opening track is "Go No More A-Roving." The words are by Lord Byron, and the song was produced and arranged by Sharon Robinson, who also shares vocal duties with Leonard Cohen.

"Because Of" is Leonard Cohen sort of poking a bit of fun at his own renown as a ladies man, even now in his seventies. "Because of a few songs wherein I spoke of their mystery, women have been exceptionally kind to my old age," he sings.

A lot of these songs are a bit on the sparse side, as far as lyrics go - something a bit unusual for Leonard Cohen, whose songs often have many verses. Think of "Stranger Song" or "So Long, Marianne."

On this album, many of the songs have few lyrics, which are then repeated often, almost like a mantra. Listen especially to "Because Of," "Undertow" and "Dear Heather." The entire lyrics to "Dear Heather" are "Dear Heather/Please walk by me again/With a drink in your hand/And your legs all white/From the winter," repeated many times, and even spelled out at points in the song. It might take a little getting used to, but this album is excellent.

"Undertow" is sweet and haunting, possibly the best song on the album. Anjani Thomas performs the lead vocals.

Sharon Robinson co-wrote "The Letters" and "There For You." Anjani Thomas co-wrote "On That Day" and "Nightingale," the latter of which is beautiful.

The only weak song on the album is "On That Day," a song about September 11th, 2001. It is his only topical song, and therein lies its weakness. No matter what the real source of Cohen's material, whatever his muse, his songs have a universal quality and appeal. They feel to be about whatever the listener is experiencing in his or her life. This song, therefore, has limited appeal. Leonard Cohen rarely writes topical songs. His music has an eternal quality to it - boundless, not tied tightly to any one experience.

The album concludes with a live track from a 1985 concert, which is peculiar in itself. But the song chosen is also a cover, which is somewhat rare on a Leonard Cohen album. The song is "Tennessee Waltz," written by Redd Stewart and Pee Wee King in 1947, and made famous by Patti Page in 1950.

Leonard Cohen has included a few covers here and there over the years, the most famous being "The Partisan," which was even included on his Best Of 1975 release. For "Tennessee Waltz," he added a verse that he penned himself.

This was his last studio release, though rumor has it Leonard Cohen is getting ready to record a new album soon. Some new songs, including "The Darkness," "Feels So Good" and "Lullabye," were performed in concert last year.