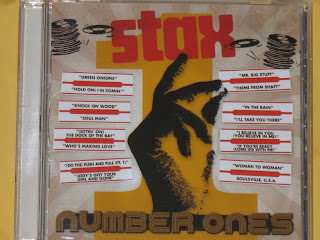 This wonderful compilation contains 15 songs that hit the number 1 spot on the charts in the 1960s and 1970s.

Stax Records was founded by Jim Stewart and his sister, Estelle Axton, in Memphis in 1959. Originally called Satellite Records, they changed the name in 1961, taking the first two letters of their last names.

(Note: some web sites have the company's starting date as 1957, but this compilation's liner notes say 1959.)

This CD celebrates the label's golden era. It contains all fifteen of the songs that hit the number one spot on the R&B and pop charts in the 1960s and 1970s. Most of these songs are well known, and probably anyone with any sort of music collection owns a few of the songs from this compilation already. But here is the perfect chance to own all of them. This is an excellent CD, and for those who aren't familiar with Stax Records, it's a great place to start. For those who are familiar with Stax, this album is a little treat.

Steve Cropper was the rhythm guitarist for Booker T. & The MGs. He went on to play with the Blues Brothers Band (and of course was in the film and its sequel, Blues Brothers 2000). He's also an incredible songwriter. He co-wrote "In The Midnight Hour" and "(Sittin' On) The Dock Of The Bay," as well as "Green Onions." Need anything more be said?

Stax Number Ones includes two #1 hits by Sam & Dave. The first, "Hold On! I'm Comin,'" is such a great song. Put on some sunglasses and a hip hat, turn up the stereo and dance around your home - and feel that everything is right with the world. It's that kind of song.

"(Sittin' On) The Dock Of The Bay" is one of the best songs in the history of music. Anyone who doesn't like this song should be shot in the head because he is most likely a mindless zombie who will feast on the brains of the neighborhood children.

At 2:41, this song is too short, but with the CD, one can listen to this song over and over. As previously mentioned, Otis Redding co-wrote this song with Steve Cropper.

Johnnie Taylor
There are three songs by Johnnie Taylor on this compilation. "Who's Making Love" presents that timeless question: "Who's making love to your old lady while you were out making love?"

Johnnie Taylor must have had a woman cheat on him, because he revisits this theme on "Jody's Got Your Girl And Gone." But then by the time he recorded "I Believe In You (You Believe In Me)" he must have finally found himself a good relationship, though outside forces are still against the couple in the song - like the woman's mother and friends.

"(Do The) Push And Pull (Part 1)"
This is a simple, sexy dance song with cool horns. This song is probably the most fun track of the compilation. It's by Rufus Thomas, and was recorded in October of 1970. It reached the top of the R&B charts on December 12, 1970.

"Theme From Shaft" is the coolest of the cool. "Who is the man that would risk his neck/For his brother man/Shaft/Can you dig it?" Yes, absolutely, everybody digs it. This was recorded in September of 1971, long before Isaac Hayes went loopy and joined a cult.

Isaac Hayes is also known for his work as Chef on the animated series South Park.

Apart from the rain sound effect, which is always annoying (yes, even in "Riders On The Storm"), this is a cool song. It was written by Tony Hester, and performed by The Dramatics. It was recorded in February of 1972.

The album concludes with Shirley Brown's "Woman To Woman." This song is a phone call from Shirley to a woman named Barbara, whose number Shirley found while going through her husband's pants pockets. Basically it's saying, "Stay away, he's mine." But what man wants a woman who goes through his pants pockets? This song was recorded in August of 1974, and hit number one on September 28, 1974.


Stax Records now operates within Concord Music Group, which also does a lot of jazz and classical music. This compilation was released on March 30, 2010.
*
Posted by Michael Doherty at 3:05 PM