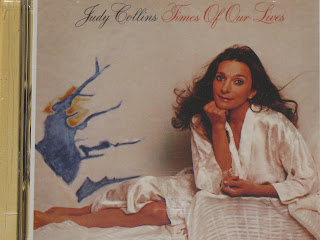 Though Judy Collins is considered a folk artist, because of her roots, she has long chosen songs from various musical genres and realms, never feeling restricted by the folk label. And by the time of this release, she had moved more and more toward a pop sound. But of course there are still folk elements on this album, heard in songs like "Grandaddy." Judy Collins wrote half the songs for this album, including a couple of its best tracks.

"Grandaddy" was written by Judy Collins. She really stretches her voice on this one, and the results are beautiful. The one has a timeless folk feel - and it's one of the best tracks on the album. The refrain is, "Wrap me up in your winter coat/Wrap me up so tight/I never will feel the cold/I'll be warm tonight."

"It's Gonna Be One Of Those Nights"

"It's Gonna Be One Of Those Nights" is another written by Hugh Prestwood. This is one of those soft pop songs that one can't help but love. It's very much a product of its time, but that's also a great part of its charm. Plus, it has a sax.

"Memory" is the famous song from the 1981 Andrew Lloyd Webber musical Cats. It's a beautiful song, and Judy Collins really nails it. Her voice is gorgeous and strong. And there is an excellent string section on this track too. This is one of the highlights of the album.

"Sun Son" was written by Anna McGarrigle. It was originally released by Kate and Anna McGarrigle on their Love Over And Over album.(On that album, the song is titled "Sun Son (Shining On The Water.") Judy Collins does an excellent job with it.

Here is a taste of the lyrics: "The sun was sinking 'cause night was falling/The boy went off to sleep/His wondrous city vanished/Into the icy deep."

"Mama Mama" was written by Judy Collins. She has many songs about family - an important theme to her. About a minute in, the song kicks in, and has a rock edge. Judy is on the edge of Pat Benatar territory here, both vocally and musically. It's only for that section, the chorus, but it's wonderful.

"Drink A Round To Ireland"

"Drink A Round To Ireland" is the third and final tune by Hugh Prestwood to be included on this album. Judy sings, "To return to Ireland was his dream/Drink a round to Ireland, boys/I'm home again." What, a song about Ireland and drinking? What a strange combination. This is a sweet and pretty and sometimes touching song.

The lyrics are heartbreaking. Judy sings, "I'm begging you to stay, if it's just a lie/I'll take the crumbs you leave at my door/I just can't bear not to see you anymore/These years of love can't be gone/Take me with you, don't leave me here alone/Don't say goodbye love/I couldn't bear to hear it/Don't say goodbye love/It's what I've always feared." This is an amazing song, one of Judy Collins' best.