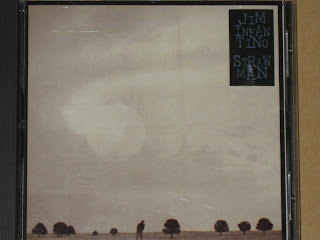 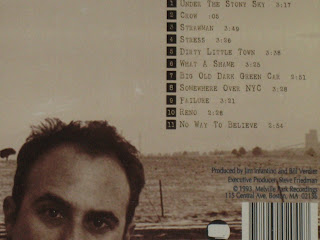 Before Jim's Big Ego, there was Jim . Jim Infantino has always been a master of mixing humor with pathos. This early acoustic album is excellent.

The album opens with "Under The Stony Sky." The lyrics that open the album are "I didn't follow your directions but I got there anyway."

Those lyrics perfectly capture what Jim Infantino is about. He's possibly incapable of following directions, and that can only help him. He's getting there anyway.

"Crow" is just that. Five seconds of the sound of a crow. Okay. Listeners need to forgive these little indulgences when folk artists get into a recording studio with all sorts of gadgets to play with. Fortunately this is the only such indulgence on this album, and it's over in five seconds.

"Strawman," the title track, features Hannah Logan on backing vocals on the chorus.

The overall sound of this album is more serious than earlier releases. Jim Infantino has a great sense of humor, and that does translate well to his music, especially in live performances. But this album really has only two obviously funny songs, those being "Reno" and "Stress."

Jim has released several versions of "Stress" over the years. The version on this album is one of the best. This song has the refrain, "Everybody's out to get me but I feel alright." The song warns, "It's the little things that get you when you weren't paying attention." Jim Infantino plays harmonica on this song.

The middle section of the song is appropriately manic. Fueled by caffeine and pressure, Jim sings, "But what I think I'd really love is to get out by myself on a little tiny island in the middle of the ocean with just me and a book and a cellular phone and a personal computer in case something came up and I'd eat and I'd drink and I'd run and I'd sleep and I wouldn't do nothing except swim all day 'cept I don't know how to do laps in the ocean, where are the sharks? where are the sharks? and there's this kind of anemone that sticks in your foot and the poison goes up to your brain and you die." Indeed.

A Real Horn Is A Change For Jim

In "Dirty Little Town" there is a cool horn part. In concert, Jim used to perform solo. He would fake the horn parts of songs with his mouth. "This song has a horn solo. I don't have a horn, but I like to think I do," he would say, introducing a song. But the song only gains from having a real horn, played by Garret Savluk.

"What A Shame" is both sad and hilarious - a mixture that works so well for Jim Infantino. The song begins with the lines, "Take a knife and stab it in your foot/now there's a reason to be unhappy/now there's a reason to be blue." So right away one might think this to be a purely silly song. But the very next lines are "Take a pill, take a lot, take the orange ones/they made you sick last time/I know you knew."

"Big Old Dark Green Car" was a concert favorite around this time. It features a funny imitation of a donkey. This version also features an excellent violin part by Karen Casey.

"Somewhere Over NYC" is a song that went through a lot of title changes, including "My Brother And Me" and "5:30 In The Morning." It's a really sweet song about an older brother building his sibling a rocket out of Legos in which they can travel to a land "where people believe you/even though you're only three." The last verse brings the listener to the present: "Now it's twenty five years later/and I'm somewhere stuck in traffic/and my radio is busted/and the car is overheating."

When The Folk World Was On Cassette And In Subways

This is an early CD release for Jim Infantino. Most of his albums before this one (such as "Trust This Face") were released only on cassette. Remember those days in the folk world? When everything was on cassette and sold in the subways of Boston and New York for whatever money one might be able to scrape together.

CD Is Not Overproduced

A lot of the folk musicians at this time would overuse the gadgets in the studio. It was like a lot of new toys, and they wanted to play with all of them. Thus, a lot of folk musicians who were amazing in concert were releasing some pretty bad records. Not so with Jim Infantino. This album is not overproduced. It sounds just exactly right. On "Failure" Jim just uses the backing vocals of Hannah Logan to add to the song without taking anything away. Any more would be too much for that song. And on "Reno" there are no accompanying musicians whatsoever.

The abum features Joel Ouellette on drums and Alex Smoller on bass.

Jim Infantino has moved on somewhat since this release. His current band, Jim's Big Ego, has a larger and louder sound. Of course, they're just as much fun to see perform in concert as Jim Infantino was back in the days of this release.

The track listing for Jim Infantino's "Strawman" is as follows: