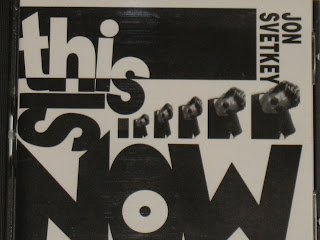 Jon Svetkey gets a bit of help from fellow End Construction members Ellis Paul and Brian Doser on this wonderful album.

The album opens with "Dead End Streets," complete with foot stomps to kick it off. Ellis Paul sings backing vocals on this song, as well as several other tracks on this album. This is a great song that always had a lot of energy in live performances. Jon still performs this song with his current band, The Loomers.

Jon sings, "I want to live on a dead end street/I want the traffic to be just my car/I want the crack of a stickball bat/I want to hear the big dogs bark."

Jon has the strange ability to be sarcastic and earnest at the same time. How does he do this? Who knows? However he does it, it works. Like in the song, "Big City," the narrator is content to stay in a small town, saying, "I've got everything I need in my back yard and my garage." And, "My wife, she's a good cook and she's still kinda pretty./ So why should I bother with the big city?" Jon, who was living in Boston when he wrote it, seems to be making fun of the guy. But at the same time, there is something honest in his love for a small town.

Whether the listener is laughing at the narrator, or siding with him, the song works. There aren't many songwriters who can do this.

In "Las Vegas," Jon sings, "I get used but I'm useful I suppose." Perfect. Barbara Kessler sings backing vocals on this song.

"(I Wanna Be A) Cheerleader"

"(I Wanna Be A) Cheerleader" is a silly song about a boy who decides to be a cheerleader. To add to the humor, the song is done in a pure country style. His cheerleading leads to his being kicked out of the house and to his father's alcoholism. But he finally makes it as a cheerleader.

Ellis Paul is actually credited twice for backing vocals for this song in the liner notes for this album.

Jon was always a master of the fun and the funny, but with songs like "Laughing Out Loud," he shows his talent for the more serious lyric too. It contains the great line, "If he had only known how to hold her hand like he held her back."

And in "Selling" he tells the story of a traveling salesman who could sell anything. But when it comes to his personal relationships, he has more trouble. He laments, "I could sell you a piece of the sky/But I could never sell myself to you."

Jon Svetkey was a member of End Construction, a group of four singer/songwriters. Two others from that band - Ellis Paul and Brian Doser - do vocals on "Myopia Street." The song mentions all four members of the group, and this song was a staple of their live performances. It's a seriously fun song. It even has a kazoo.

"Talking With My Heart (An Open Letter To A Revisionist)" is dedicated to the survivors of the Holocaust, their families and to the families whose loved ones did not survive. And of course the song is a response to those people who claim that the Holocaust never happened. It's a powerful song.

"A Way Of Praying"

Jon Svetkey ends the album with the quiet and thoughtful "A Way Of Praying." He used to introduce this song in concerts by saying it was about a new hobby of his - that is, dropping pennies so that others might pick them up and have good luck.

Ellis Paul And Brian Doser Are Among Musicians On CD

This album was produced by Jon Svetkey and Brian Doser. It was originally released on ECP Records (End Construction Productions).

Posted by Michael Doherty at 1:02 AM