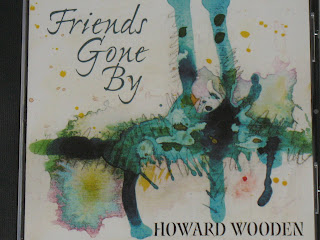 Howard Wooden's 2004 release, Friends Gone By, contains mostly original songs that are basically folk, but have some interesting variations and some surprising instrumentation. For example, the saxophone in the opening track, and the ending of "I Want To Be Free."

Howard Wooden is also a member of the Vermont folk band Woods Tea Company. That band has been around since the early 1980s, though Howard did not officially join until 1992.

"Living On The Iceberg"

"Living On The Iceberg" has sound and tone reminiscent of 1970s folk. Then nearly two minutes in, Dave Grippo shows up on saxophone. It's a nice surprise. This song was written by Josh Mitchell and Howard Wooden.

The chorus is, "And down on the corner/Is a store room full of books/Full of facts on what/Where and when I should look/But they don't tell/The most important thing of all/Why should I be looking there at all?"

"The Sun's Still In My Eyes (Roll Over)"

"The Sun's Still In My Eyes (Roll Over)" is another song with a 1970s folk feel. In one way, it's a song about wasting time, of never really getting going or getting a start. About not quite waking up. But how much time really passes in the song? Is it a lifetime, or just that moment when one passes from dreaming to waking?

This song was written by Howard Wooden and Janine Hubbard.

"Celtic Dreams" is an instrumental track, one of two on Friends Gone By. This song is pretty and mellow. It features Tom MacKenzie on the hammered dulcimer.

"Do You Love Me?" has a jazzy feel, both in the rhythm and the piano. This song features some cool work on piano by Chas Eller. It also features Dave Grippo on saxophone.

"Friends Gone By," the album's title track, was written by Howard Wooden and Josh Mitchell. It has a bit of a country feel, particularly in the vocals. Howard sings, "Time you've made this foolish heart - /You have changed this boy into man/While you stole my dreams and wrecked my plans."

"Friends Gone By" was written by Howard Wooden and Josh Mitchell.

"Drema Kalajian" is an instrumental track that features Tom MacKenzie on hammered dulcimer. The dulcimer gives the track a timeless feel. The song is pretty, at least for the first minute or so. Then it abruptly changes its tone, rhythm, pace and instrumentation. The percussion then takes part of the focus. This is a really enjoyable song, possibly the best on this CD.

In the liner notes, Howard explains that this song is named after a friend from high school, a friend whose name he always loved.

"Darling Children" is one of the album's two cover songs. It was written by Rusty Magee in 1995, and is a song from a father to his children.

The album's other cover song is "1002," written by Terry Talbot and John Talbot. The vocals sound particularly good on this song, with a nice blending of the backing vocals with Howard Wooden's voice.

The song is actually two tracks. The first track is titled "1002 Intro." It has a crackling sound, like an old record playing over the radio. The song is admittedly a collection of guitar riffs ripped off from Leo Kotke and Jefferson Airplane (most obviously "Embryonic Journey").

It leads right into the second track, and soon after it starts, the crackling sound fades. The second track, "1002," features Rusty Jacobs on dobro and Mike Lussen on banjo. It's a sweet and pretty song that was written in 1972. The chorus is "I know I told you I love you/A thousand and one times I do/But if now I should say good luck and walk away/Just figure a thousand and two."

The ending, which sounds like someone tapping out a drum beat on his lap, is pointless. The song should have been cut before that because the ending just detracts from the wonderful feel of the song.

Friends Gone By concludes with "Like A Light," an extremely short song that is sung acappella.

Friends Gone By was released on Gadfly Records in September of 2004. Howard Wooden released two other solo records: Celtic Dreams and Out On A Limb (2001). Some of the songs featured on Friends Gone By were also included on these earlier releases, such as "Roll Over" and "Dream Kalajian."
Posted by Michael Doherty at 2:24 PM