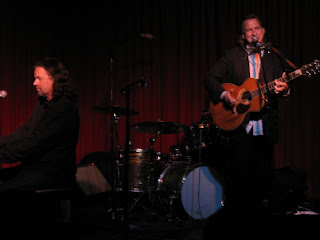 Ellis Paul did a wonderful - if short - set at The Hotel Cafe tonight. This was a special Sorted Noise Showcase performance, and at the beginning of his set, Ellis said, "I don't think I've ever played on a Tuesday."

He then introduced his band: Radoslav Lorkovic on piano and backing vocals (and accordion on a few songs).

Ellis opened with the sweet "Rose Tattoo" off his most recent studio release, The Day After Everything Changed. After that, he did a cover of Roy Orbison's "Crying," which he dedicated to a couple who were celebrating their sixtieth anniversary. Ellis's version of "Crying" is quite a bit different from the original - he certainly makes it his own - but he does hit those wonderful high notes on the word "Crying." The notes that made that song so famous and so loved.

Two of my personal favorite Ellis Paul songs are "Maria's Beautiful Mess" and "Take All The Sky You Need," and he performed both at this show. Radoslav was really into "Maria's Beautiful Mess" tonight, doing some great stuff on piano. You could see the joy on his face - this giant smile. And it affected Ellis as much as it did the audience. Ellis joked after that song about Radoslav getting paid by the note.

Before "Take All The Sky You Need," Ellis told the audience, "The bad part is that we only have forty-five minutes." That's incredibly short for an Ellis Paul concert. So to make it up to the fans who'd come out, he told them they could each take a CD on their way out. (And yes, he left a stack of copies of The Day After Everything Changed by the door to the club.)

Ellis Paul performed a new song, which he described as a tribute to Johnny Cash. It's a great tune, with funny references to a lot of Cash's songs. He got the audience singing along to the title line, "Kick out the lights." Once everyone was singing that loudly enough to please him (like a chant at a soccer match, he said), he had the women add, "Johnny Cash, Johnny Cash, Johnny Cash." And guess what? The crowd sounded good. No fear, no shyness in this crowd.

Ellis and Radoslav stepped off the stage and into the audience for "Annalee." On this one, Radoslav played accordion. This was a fun and fantastic rendition of the song, and it got the audience cheering.

The set was really just starting to cook, but it was already over. Ellis ended the set with the beautiful "Once Upon A Summertime," which was included on The Day After Everything Changed. Ellis played piano, and Radoslav played accordion on this one.

Set List
There was no encore, though the audience definitely wanted one. Sets at the Hotel Cafe are always forty-five minutes, no matter who is playing.