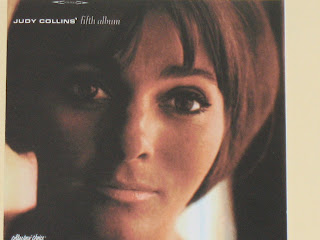 Somehow several of Judy Collins' CDs were allowed to go out of print. How did this happen? It's ridiculous that any of this important singer's material is unavailable. But Collectors' Choice Music is going to re-release nine of her albums in July. This is cause for music lovers to rejoice, for Judy Collins has a sweet and strong voice, and has always chosen excellent material for her records.

"Pack Up Your Sorrows"

Judy Collins starts Fifth Album with "Pack Up Your Sorrows," a very pretty song written by Richard Farina and Pauline Marden. Richard Farina plays dulcimer on this track, adding a wonderful sound. Eric Weissberg (who is perhaps still best known for his rendition of "Dueling Banjos" from the film Deliverance) plays second guitar.

Judy Collins had started out by doing mostly traditional folk songs, as did most folk singers at that time. By the time of this album, she was covering a lot of contemporary songwriters, but not to the extent that she excluded traditional songs. Her version of "So Early, Early In The Spring" is one of the highlights of this album. It's a beautiful song, and Judy's voice soars and plays within its framework.

Judy Collins covers three Bob Dylan songs on this album. The first is "Tomorrow Is A Long Time," a song that Ian & Sylvia covered in 1963 and Elvis Presley covered in 1966. Judy's version is beautiful.

Also included on this album is her version of Dylan's "Daddy You've Been On My Mind," a song for which Bob Dylan never issued an official version. Joan Baez also included this song on a 1965 release. Danny Kalb plays guitar and Bill Lee plays bass on Judy Collins' version.

The third Dylan song on this album is one of Bob Dylan' most famous songs, "Mr. Tambourine Man." This was Hunter S. Thompson's favorite song. The version by The Byrds would become famous. Judy Collins' version is more in the folk vein, but interestingly has more power than other versions, particularly due to the vocals. Also, the guitar work is great, containing a wonderful urgency. Bill Lee plays bass on this song.

"Thirsty Boots" is another beautiful song. It was written by Eric Anderson. Judy sings, "Then take off your thirsty boots/ And stay for a while/Your feet are hot and weary/ From a dusty mile/And maybe I can make you laugh/And maybe I can try/Just lookin' for the evening/And the morning in your eyes." Who wouldn't want to be comforted in that way by Judy Collins' loving voice? Even for those who are not tired from traveling, this song has the power to soothe and comfort.

John Sebastian (from The Lovin' Spoonful) plays harmonica on this song, and his is a strong presence. Eric Weissberg plays second guitar.

Judy Collins covers the Phil Ochs song "In The Heat Of The Summer," which is about the riots and racial violence that erupted in cities in the mid-1960s. It's an earnest and effective song, and Judy's version is emotionally charged. Here is a taste of the lyrics: "Now no one knows how it started/Why the windows were shattered/But deep in the dark, someone set the spark/And then it no longer mattered."

She also covers "Early Morning Rain," which is possibly Gordon Lightfoot's most famous song. Certainly, it's one of his best. This version is wonderful and features Eric Weissberg on second guitar and Bill Lee on bass.

"Carry It On" is a song written by Gil Turner. It's a pretty and powerful song, and one of the best on this album. It features Richard Farina on dulcimer.

The album concludes with a live recording of "It Isn't Nice." This song was recorded at a concert Judy Collins did on March 21, 1964 in New York. This is the same concert that yielded Judy Collins' fourth album, The Judy Collins Concert (1964).