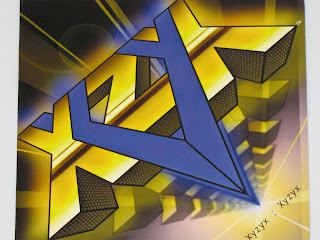 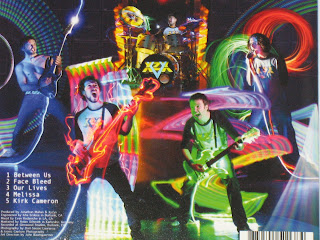 This first CD by Xyzyx is twenty minutes of hard pop rock with a definite 1980s influence. This is no surprise, as lead singer and songwriter David Daskal's favorite band is Def Leppard (his favorite song is "Foolin'" from 1983's Pyromania). The 1980s influences also are obvious in the song's final track, an ode to Kirk Cameron. So just how serious are these guys? Well, they've opened for Steel Panther - if that's any indication. And the brothers John and Paul Baumgaertner are in an improv troupe. Regardless of how firmly the tongue is placed in cheek, this band is certainly serious about giving its audience a good time. A lot of thought goes into their live performances. For this first release, they've chosen songs that they regularly perform at their concerts.

This EP opens with "Between Us," the only track on which David does not sing lead. John Baumgaertner holds that honor on this one. He also wrote this song, which opens, "Whenever you close your eyes/And hide behind your senseless masquerade/You know that it tests the bonds between us." This track features a great rolling bass line from Adam Sears. The song ends with is a wonderful kick-ass driving rock rhythm.

David Daskal sings lead on "Face Bleed," a song whose lyrics he wrote. He delivers a lot of this song in an almost spoken word style. To my ear, this song is most successful when David belts it out, reaching his higher register, particularly on lines like "You make the face bleed/Every time you punch it/You mess the brain up/Successful when you mend it/You tear the heart out/With no one there to witness." There is an extended quieter instrumental section in the middle of this song, until the guitar pulls it back into more rocking territory toward the end.

"Our Lives" is a pop tune on the harder side. It starts off with just the vocals and a few chords strummed on the guitar during the lines, "No, I’m not a fan of love songs/But I’ve been holdin’ in for so long/You’re pushin’ things/It destroys me/Now I need you to wake up and see." Then it kicks in with a joyous force for the chorus: "Our lives/Were not meant to be lived together/Good times/Yeah, there were plenty of them/We try/To block out but we still remember/Now I cry/In my house all alone for you."

This one was written by Eric Lordan, who previously drummed in the band, and it is one of the EP's best tracks. It is an unabashed pop tune, and again with a definite 1980s bent to it.

"Melissa" is probably the EP's best track. It has seriously catchy pop rhythms, particularly in David's vocal line. When you build a time machine, go back to 1986 and insert this song into the soundtrack of a comedy, then come back to the present and pop in the DVD. No one will question this song's inclusion. Here is a taste of the lyrics (written by David Daskal): "And I wish ya/All the best that life has got to give/You and I both know just how to live/And when the rain starts pouring down/You keep your feet up on the ground/Don’t ever doubt yourself."

This EP concludes with an ode to Kirk Cameron, that crazy star of Growing Pains and Like Father, Like Son (the song contains references to both). This song also functions as a general ode to the 1980s teen idols, those folks whose faces covered the many teen rags of that decade. People such as Corey Haim and Corey Feldman. But of course the main focus is Kirk Cameron. Here is a bit of the song's lyrics: "Kirk Cameron/Why did you change?/It’s not so deranged/To think you’d be great in a Rated R movie."

For those who don't know, Kirk Cameron took to religion during the shooting of Growing Pains. At the age of 17, he went from being an atheist to being a born-again Christian. As a result, he insisted that the show not have any storylines that were too racy. We're still talking about Growing Pains here. Later he started a religious-themed reality television show with his friend Ray Comfort. The show, titled The Way Of The Master (holy moly), aired for four seasons. He's also acted in the Left Behind film series, considered by some to be a nutty bit of religious propaganda. So he hasn't yet come back to rational territory.

This song sort of makes a plea for him to come back, and it does so with a sense of humor, asking him to be in an R-rated film (something religious folks refrain from, unless of course that film shows a character named Jesus Christ being tortured and killed).

The song contains a references to Leonardo DiCaprio, who had a small part in Growing Pains and has since gone on to bigger and better things (you may have heard of him).

"Kirk Cameron" also includes part of the Growing Pains theme song, "As Long As We've Got Each Other," which was written by John Bettis and Steve Dorff, and performed by BJ Thomas.

As of this recording, Xyzyx is David Daskal on lead vocals, Johnny Baumgaertner on drums, Paul Baumgaertner on guitar, and Adam Sears on bass. Amy Aileen Wood plays drums on "Our Lives." In concert, John Baumgaertner plays rhythm guitar, not drums.

Eric Lordan was the drummer for Xyzyx, but when he moved from Los Angeles, Mesindo Pompa took over behind the kit. He joined the band during this EP's post-production, and so does not appear on these tracks.

In August of 2010 I posted a two-part interview with lead singer David Daskal. In the first section, he discusses the band's inception and songwriting. In the second section David talks about the band's live performances.
Posted by Michael Doherty at 1:51 PM