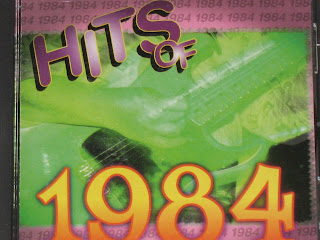 This CD contains ten songs that reached the U.S. charts in 1984, including Nena's "99 Red Balloons" and The Psychedelic Furs' "The Ghost In You."

This compilation contains ten songs that were hits in 1984. They range from big hits like "99 Red Balloons" to songs that barely charted, like "Superstar/Until You Come Back To Me."

Michael Jackson Wrote "Centipede"
The album starts with "Centipede," a song performed by Rebbie Jackson, and written by her younger brother, Michael. This song was her first single and her biggest hit, reaching #24 on the U.S. Hot 100 chart. It's a harmless song, but it's a surprise that this was a hit - especially in 1984, a year which saw some of the best 1980s rock and pop. Here is a bit of the lyrics: "Like a centipede that's hot/The fire is in your touch/Just like a centipede you've got/A lot of lovin' to touch." What does that mean?

"99 Red Balloons"
The version of "99 Red Balloons" on this compilation is the English version. The single had both versions, which was great. But here is the version that got the most airplay here in the states. This is one of those great songs of the 1980s that transcended the period. It works as a dance song, but it also has something to say. And there are some interesting musical changes throughout the song. In this translated version, she sings, "Ninety-nine dreams I have had/Every one a red balloon/Now it's all over and I'm standin' pretty/In this dust that was a city." This song reached #2 on the U.S. charts.

Psychedelic Furs
"The Ghost In You" has that unmistakable Psychedelic Furs sound as soon as it starts, even before the vocals kick in. And then it has those great vocals. This is a beautiful song, definitely one of the Furs' best. The chorus sounds wonderful - there is something really pretty about it: "Inside you the time moves/And she don't fade/The ghost in you/She don't fade/Inside you the time moves/And she don't fade." This wonderful song only reached #59 on the U.S. charts. It was written by Richard Butler and Timothy Butler.

"Let's Hear It For The Boy" was written for the film Footloose by Thomas Snow and Dean Pitchford. Remember when "original soundtrack" actually meant original soundtrack? That's right. Dean Pitchford co-wrote every single song that was included on the soundtrack. He also wrote the screenplay. (There were, however, a couple of other songs included in the film, but not on the soundtrack, that weren't written by him - "Hurts So Good" by John Cougar, for example.) Every song in the movie is a good song, but this one is a lot of fun. Remember this scene? Kevin Bacon teaches Chris Penn how to dance. It's one of the best scenes in the film - a classic 1980s montage.

"Come Back And Stay" was written by Jack Lee and recorded by Paul Young. This is kind of a forgettable song - one of those 1980s songs that was a hit for some reason but isn't very interesting. This song was actually included on Paul Young's 1983 album "No Parlez."

This version of "I Do' Wanna Know" by REO Speedwagon is a live concert recording. The original version is from the 1984 album "Wheels Are Turnin'," and was also released as a single. It was written by Kevin Cronin, and is a totally fun song.

"All Through The Night" is a beautiful song. It's one of the best off of Cyndi Lauper's She's So Unusual album, an album full of great songs. That album actually was released in 1983. But this single was not released until May of 1984. It reached #5 on the Billboard Hot 100. Cyndi Lauper has a such a cool and distinct voice and style. And then there is that great synthesizer section of "All Through The Night." Just a great song.

Toto had several hits over the years, including the excellent "Rosanna." "Stranger In Town" isn't nearly as good as that one, but it's still worth listening to. It does some interesting things - with background vocals and little touches on the horn. It was written by David Paich and Jeff Porcaro. "Stranger In Town" was the first single off of their 1984 album Isolation. It reached #30 on the U.S. chart.

Luther Vandross
It's hard to believe that "Superstar/Until You Come Back To Me (That's What I'm Gonna Do)" was a hit. It's more than nine minutes long, and the radio - especially hit radio - tends to shy away from long songs. It starts with a bit of "Until You Come Back To Me," with strings backing Luther up. It then goes into a piano rendition of "Superstar" - a song made famous by The Carpenters. After an instrumental section, he starts the vocals for "Superstar." It's not the best version. For a better one, listen to Joe Cocker's Mad Dogs & Englishmen version. It was written by Leon Russell and Bonnie Bramlet. "Until You Come Back To Me" was written by Stevie Wonder, Morris Broadnax and Clarence Paul. This song reached only #87 on the Billboard Hot 100.


This compilation was released in 1999 by Sony Music Entertainment. Apart from songwriting credits and song lengths, there is no information in the liner notes.
Posted by Michael Doherty at 5:35 PM