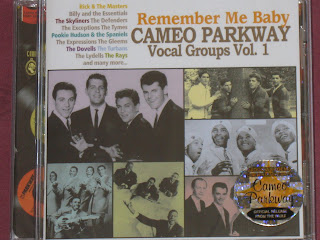 This completely wonderful compilation features some great doo-wop vocal groups of the 1960s, including The Lydells, The Dovells and The Turbans.

Owning this album is like having one's own oldies radio station, except with a better song selection. This compilation contains twenty-four songs, most of which have never before been released on CD. It is a total treat for music lovers.

The CD itself is designed to look like a 45. That's been done before with other CD releases, but with this one, it really makes sense. It completely fits the feel of the album, and is a nice touch.
Rick And The Masters

"I Don't Want Your Love" is an excellent song, with a cool bass line. It was written by Kal Mann and Dave Appell. (Kal Mann was co-founder of Cameo-Parkway.) This is a pure bit of early sixties fun, with some wonderful lyrics, such as, "When you said goodbye/First you made me cry/But I soon forgot about you/Now that you are free/You'll crawl back to me/But baby, I can do without you/I don't want your love."

"Three Coins In The Fountain"

"Three Coins In The Fountain" was written for the film of the same name. It actually received the Academy Award for Best Original Song in 1954. There are, of course, many versions of this song available. The one on this compilation is by The Skyliners, and was recorded in early 1962, and it's a good version.

This compilation also contains another song by The Skyliners, "Everyone But You." This song was written by Cameo-Parkway founders, Kal Mann and Bernie Lowe, and features some pretty piano work.

"Short On Bread" by The Dovells

"Short On Bread" is a fun rock 'n' roll tune, with hand claps, nice drum rolls and a cool saxophone. This is what early sixties party rock is all about. This is a perfect tune about a guy who wants to take a girl to the party but just has no money. Ah, those wonderful simple troubles. This song is by The Dovells, and was actually never released before. Amazing.

An interesting thing about The Dovells is that their original name was The Cashmeres. They began in 1959, while still in high school. Another band at that same Philadelphia high school took on a name as a joke in relation to The Cashmeres, that name being The Orlons. (Two records by The Orlons are being released on CD for the first time, also as part of this series.) The Dovells were also called The Brooktones, until they were renamed by Cameo-Parkway co-founder Bernie Lowe. The Dovells had a big hit with "Bristol Stomp" in 1961. "Short On Bread" was recorded in July of 1963.

"I Laughed So Hard"

"I Laughed So Hard" is another wonderful gem, this one by The Defenders. It was recorded in September of 1964. It's got a great beat, and some nice guitar work.

The Roommates had recorded on another label before they went to Cameo-Parkway. Their first single with Cameo was a cover of the Harptones' "Sunday Kind Of Love." It features seriously sweet vocals. The flip side of that single, a cover of "A Lovely Way To Spend An Evening," is also included on this compilation.

"Tears In My Heart"

"Tears In My Heart" is somewhat reminiscent of "Those Magic Changes," especially in the guitar. Actually, it may be exactly the same guitar part. It also has a couple of lines similar to those in "Tears On My Pillow." Still, it's a cool song. The Dovells do backing vocals on this tune.

The Turbans' song "When You Dance" features an excellent string section as well as some wonderful vocal work. The Turbans had already been around for eight years when they recorded this song for Cameo Parkway in 1961. In fact, they had released an earlier version of this song in 1955. Also on this release is "Golden Rings," recorded during the same sessions in 1961.

"Turn Out The Lights"

"Triangle" by The Rays is surprisingly funny. The CD ends with another seriously fun song, "Down By The Ocean" by The Exceptions.


This compilation is one of the initial six Cameo-Parkway classic records to be released through Collectors' Choice Music in conjunction with ABKCO. It's scheduled to be released on June 22, 2010. The "Volume 1" in the title implies at least a Volume 2. Here's hoping that the second volume is released soon.