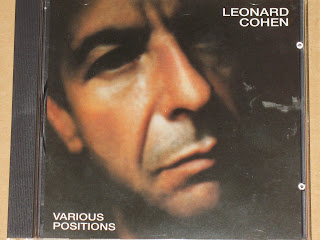 Various Positions is one of the best albums ever recorded. This album was not initially released in the United States, but has proved in the years since to be an incredible recording.

The album opens with "Dance Me To The End Of Love," the song Leonard Cohen chose to open his concerts with on his most recent tour. A beautiful song. (He also opened many of his concerts on his 1988 and 1993 tours with this song.)

The second song on this album, "Coming Back To You," is one of Leonard Cohen's best songs. Leonard Cohen's songwriting proves itself to still be strong, with lyrics like "I looked for you in everyone/And they called me on that too." The song ends with, "And all I said was just instead of coming back to you." He doesn't even go back to her.

"Night Comes On" is another of Leonard Cohen's best songs. "I needed so much to have nothing to touch/I've always been greedy that way."

And then there is "Hallelujah," certainly his most famous song from this album, and one of the songs most covered by other artists. There are versions of this song by Jeff Buckley, John Cale, Rufus Wainwright, k.d. lang, Bob Dylan, Allison Crowe, Willie Nelson, Bono, and even Justin Timberlake.

The song has gone through some changes since the release of Various Positions. When performed in concert these days, there are some different verses, but that is the way with several of Leonard Cohen's songs (for example, "Bird On The Wire"). Listen to the version on Live In London to hear the current lyrics. There is also an excellent version on Cohen Live (1994), recorded at Austin City Limits, October 31st, 1988.

This album came after a long lull - his last release coming five years earlier, 1979's Recent Songs. This album has a fuller sound, with a band that includes John Crowder on bass, Richard Crooks on drums, Sid McGinnes on guitar, Kenneth Kosek on fiddle, Ron Getman on harmonica and John Lissauer on piano.

Jennifer Warnes does backing vocals on this album. She released an entire album of Leonard Cohen covers, titled, Famous Blue Raincoat. This album recently was re-released on CD, with bonus tracks. This edition was released in August, 2007. On her album, she covers three songs from "Various Positions": "Coming Back To You," "Night Comes On" and "If It Be Your Will."

Anjani Thomas also does backing vocals on this album. Fans of Leonard Cohen know that she co-wrote some of the songs on Leonard Cohen's 2004 release Dear Heather.

All songs on Various Positions were written by Leonard Cohen. He also took the photo that graces the cover of the album.

Album Not Released In U.S.

Shockingly, when this album came out, it did not get released in the United States. Columbia Records refused to release it. Walter Yetnikoff, the president of Columbia, famously called Leonard Cohen into his office and said, "Look, Leonard, we know you're great, but we don't know if you're any good." Columbia finally released it in 1990 as part of Leonard Cohen's entire work on CD.

Three songs from this album were staples in his recent 2008-2009 tour: "Dance Me To The End Of Love," "Hallelujah" and "If It Be Your Will." In concert, Leonard Cohen would introduce "If It Be Your Will," but then the Webb Sisters would take it from there, performing a beautiful rendition of this song that became a highlight of the show. They truly do sound like angels.

At some of his shows on this tour, he also performed "Heart With No Companion." People have said that this song is depressing, but they misunderstand. He's saying, "I greet you from the other side of sorrow and despair." He's greeting the listener from the other side. He's made it through, and he's telling the listener that he or she can make it through too. It's actually a positive, optimistic song.

This is often the way with Leonard Cohen's music. People at first mistake it for depressing and sad. But there is much optimism and humor in Leonard Cohen's songs. (In "Hallelujah" he rhymes "hallelujah" with "what's it to ya.")